Support:Vifor Pharma funded a writer to attend the symposium and develop this manuscript accordingly.

Dr Carolyn Lam began by discussing data from the recent prevalence study of ID in HF,3 for which the study cohort was from European countries only. A study of ID in Asian patients with HF (n=751) found a higher prevalence of ID (61 %).8 The prevalence was particularly high in women (71 % versus 59 % in men) and in South Asian Indian populations (a prevalence of 82 %).8 South Asians tend to be vegetarian and also drink black tea, which has been shown to decrease iron absorption by 80 % when taken with food.9

Genetic factors are also important in determining ID; a number of studies have investigated TMPRSS6, which encodes a transmembrane serine protease produced by the liver that regulates the expression of the systemic iron-regulatory hormone hepcidin. Germline mutations in TMPRSS6 have been found in extended families where more than one member had ID.10 Variants in TMPRSS6 have also been found to be risk factors for ID and iron deficiency anaemia (IDA) in 2,139 unrelated elderly Chinese women.11

In order to evaluate the impact of ID in HF, it is important to understand iron metabolism. Dietary iron is utilised not only in circulating erythrocytes, but also in muscle myoglobin and other iron containing enzymes.12 Patients with HF may be iron deficient as a result of reduced iron storage (absolute ID), which may be caused by malnutrition, malabsorption and gastrointestinal (GI) oedema and blood losses (due to use of anticoagulants, non-steroidal anti-inflammatory drugs [NSAIDs] and loss of mucosal integrity).13 Another important cause of ID in HF is impaired iron mobilisation (functional ID), resulting from the inflammatory processes that characterise chronic HF. Activation of pro-inflammatory cytokines such as interleukin-6 (IL-6), interleukin-1 (IL-1) and tumour necrosis factor alpha (TNF-α) causes over-expression of hepcidin by the liver. This blocks the intestinal absorption of iron and diverts iron from the circulation into the reticuloendothelial system (RES), causing reticuloendothelial block, as well as blunting responses to erythropoietin (EPO) and causing apoptosis of erythroid progenitors.13–15 At the cellular level, ID reduces the delivery of oxygen to the mitochondria but also directly decreases the activity of key enzymes of the citric acid cycle and of the respiratory chain of the mitochondria, resulting in reduced oxygen utilisation (which is, in the clinical setting, observed as reduced peak oxygen consumption [pVO2]).16

Association Between Iron Deficiency and Mortality in Heart Failure 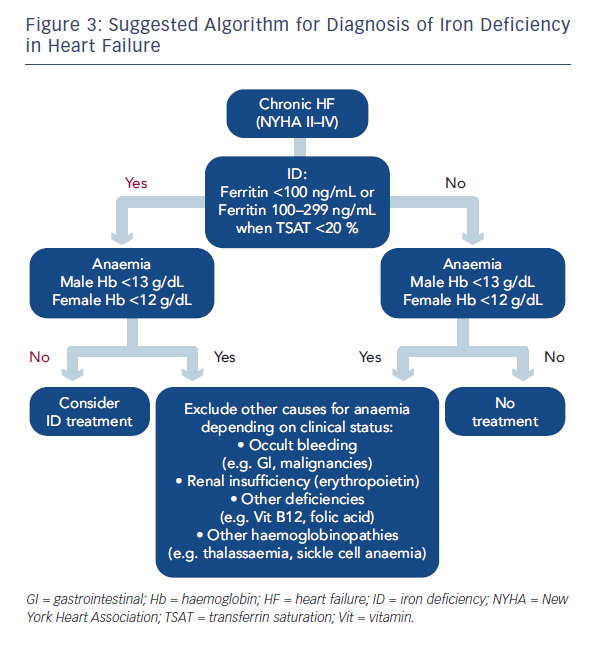 ID reduces work capacity and energy efficiency in HF17,18 and iron status correlates to NYHA status.3 The fact that ID but not anaemia is associated with reduced exercise capacity in HF4 can be explained by the non-haematopoietic effects of iron, including its role in mitochondrial function in cells with high energy requirements, such as cardiomyocytes and skeletal myocytes. In patients with chronic HF, ID but not anaemia has also been associated with reduced QoL (assessed using the Minnesota Living with Heart Failure [MLWHF] questionnaire), mostly due to physical factors.5,6 Furthermore, ID is a stronger negative prognostic indicator for all-cause mortality than anaemia (see Figure 2).3 A recent study in Singapore assessed the impact of ID in Asian patients with HF. Functional ID was found in the majority (64 %) of patients with HF. Patients with ID were more symptomatic with higher NYHA class and MLWHF score, regardless of ejection fraction (EF).19 Patients with concurrent ID and anaemia had the poorest prognosis regardless of EF.

In the 2012 ESC Guidelines for the diagnosis and treatment of acute and chronic heart failure, the ESC recommended ID testing in HF patients based on the assessments of ferritin and TSAT.2,7 This raises the question of which iron indices are the most useful. Two are currently used: ferritin (a measure of stored iron) and TSAT (a measure of circulating iron for functional utilisation). However, ferritin is also an acute phase protein and can be falsely elevated if inflammation or subclinical infection is present, but a low ferritin level is a clear indication of ID (absolute). If ferritin is increased TSAT (<20 %) can be used for the diagnosis of ID (functional). The only limitation of TSAT is the circadian differences since the calculated value is dependent on the serum iron. Due to their intrinsic limitations, the combination of thresholds of these two parameters is suggested, as for the FAIR-HF study (ferritin <100 ng/mL or ferritin 100–300 ng/mL if TSAT <20 %). The ideal marker would probably be the soluble transferrin receptor (sTfR); however, this is not widely available or used in clinical practice.13 Based on the ESC recommendations and data from the FAIR-HF clinical trial, a suggested algorithm for diagnosis on ID in HF is proposed (see Figure 3). Recommendations worldwide are being changed to incorporate the need to assess and treat ID in
patients with chronic HF.20

In conclusion, ID is present in half of all HF patients in Europe and in up to 80 % of Asian patients. While it is the main cause of anaemia in HF, ID occurs in over 45 % of non-anaemic patients and is independently associated with reduced exercise capacity, reduced QoL and poor outcomes 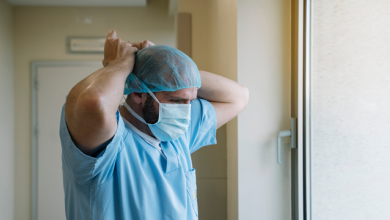 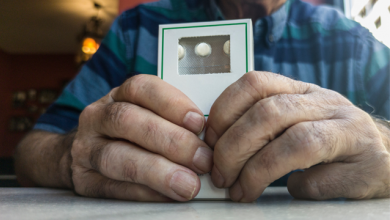