Heart failure is a growing problem in sub-Saharan Africa. This arises as the prevalence of risk factors for cardiovascular disease rises, life expectancy increases and causes of heart failure more common in Africa, such as rheumatic heart disease and endomyocardial fibrosis, continue to be a significant issue. Lack of access to diagnostics is an issue with the expense and technical expertise required for echocardiography limiting access. Biomarker strategies may play a role here. Access to essential medicines is also limited and requires a renewed focus by the international community to ensure that appropriate medications are readily available, similar to that which has been implemented for HIV and malaria.

Patients with heart disease in Africa commonly present with heart failure both for admission to hospital1 and in the outpatient setting.2 Recent data suggests that, in line with high income countries, heart failure with preserved ejection fraction is also becoming more common.3 Data from the 12 clinical studies performed before 2005 in eight sub-Saharan Africa (SSA) countries have shown that up to 75 % of cases of heart failure were non-ischaemic in origin.1,4 A recent study showed that patients with heart failure in Africa were the youngest (mean [SE] = 53 [0.4] years), most likely to be illiterate (43 %), lack health insurance (66 %) and medication insurance (67 %), and most likely to be in New York Health Association functional class IV (21 %) compared with those from Asia, the Middle East and South America.5

Over the past several years a shift in the cardiovascular disease profile has been observed, which was reflected by recent clinical trial data derived from the largest multicentre registry for heart failure in Africa. The sub-Saharan Africa Survey of Heart Failure (THESUS-HF)6 study characterised the causes, treatment and short-term outcome in 1006 Africans from nine SSA countries. Compared with data from prior to 2005, it highlighted hypertension as a rising cause of heart failure (from 23 % to 43 %), an increasing importance of cardiomyopathies (from 20 % to 29 %), a reduced recognition of rheumatic heart disease (from 22 % to 17 %), and a rise in ischaemic heart disease (from 2 % to 8 %) in the aetiology of heart failure.4 Recent studies that have specifically looked for evidence of ischaemic heart disease have shown a higher prevalence than previously reported. A case-control study from Kenya recently suggested that ischaemic heart disease was the second most common cause of heart failure.7 This is in line with the changing demographics in Africa and rise in risk factors, such as hypertension, diabetes and obesity (Table 1).

There are also causes of heart failure that are significantly more prevalent in Africa and rarely found outside low-income countries, such as rheumatic heart disease, endomyocardial fibrosis and HIV-related cardiomyopathy.

Rheumatic heart disease, caused by infection with group A Streptococcus, has been virtually eliminated in high-income countries but continues to be a significant problem in Africa. The prevalence of clinically silent rheumatic heart disease (21.1 per 1000 people; 95 % CI [14.1–31.4]) was about seven to eight times higher than that of clinically manifest disease (2.7 per 1000 people; 95 % CI [1.6–4.4]).20 A recent study demonstrated the young age of patients with this condition (median age of 28 years) had a female preponderance (66.2 % female) and up to a quarter had evidence of left ventricular dysfunction.21 Prevention of progression of valvular disease is currently based on regular penicillin prophylaxis.

Endomyocardial fibrosis is characterised by deposition of fibrous tissue on the endocardial surfaces and is the most common cause of restrictive cardiomyopathy. Its cause is unknown and there are no specific treatments for it. It is commonest within 15 degrees either side of the equator and commonly affects the young. A screening study in rural Mozambique showed a prevalence of 19.8 % with the highest prevalence among those aged 10–19 years.22

The pathophysiology of heart failure in HIV-infected persons is multifactorial and intimately related to the presence of traditional risk factors for coronary artery disease, myocardial inflammation, myocardial fibrosis, coronary artery disease and pericardial disease. The advent of antiretroviral therapy led to a dramatic reduction in this condition and, similar to heart failure of other aetiologies, heart failure with preserved ejection fraction is the most prevalent form of HIV-related cardiomyopathy in the era of Highly Active Antiretroviral Therapy.23,24

The diagnosis of heart failure can pose significant challenges in Africa due to lack of access to appropriate diagnostics. Internationally, at least, six heart failure score methodologies based on symptoms and signs have been developed to help diagnose and assess the prevalence of heart failure in the non-hospitalised patient.25 These generally include clinical history and examination, and chest X-ray at a minimum. A number of these criteria26–28 were established before noninvasive techniques for assessing systolic and diastolic dysfunction became widely available. However, although the scores are useful in detecting manifest heart failure, objective measurements of cardiac function, such as echocardiography, appear necessary to reduce the false positive rate and accurately detect early stages of heart failure25 and are now an essential part of European and North American guidelines on the diagnosis of heart failure.29,30,3 However, echocardiography is not widely available in Africa, where a reported survey in Kenya and Uganda showed functional and staffed radiography, ultrasound and ECG were available in less than half of hospitals in Kenya and Uganda combined; this did not specifically address echocardiography.31 It has also been demonstrated that training nurses and mid-level providers in simplified echocardiographic protocols can be an effective strategy to improve heart failure diagnosis and management in SSA, but equipment remains relatively expensive for such resource-poor settings and training can be an issue.32 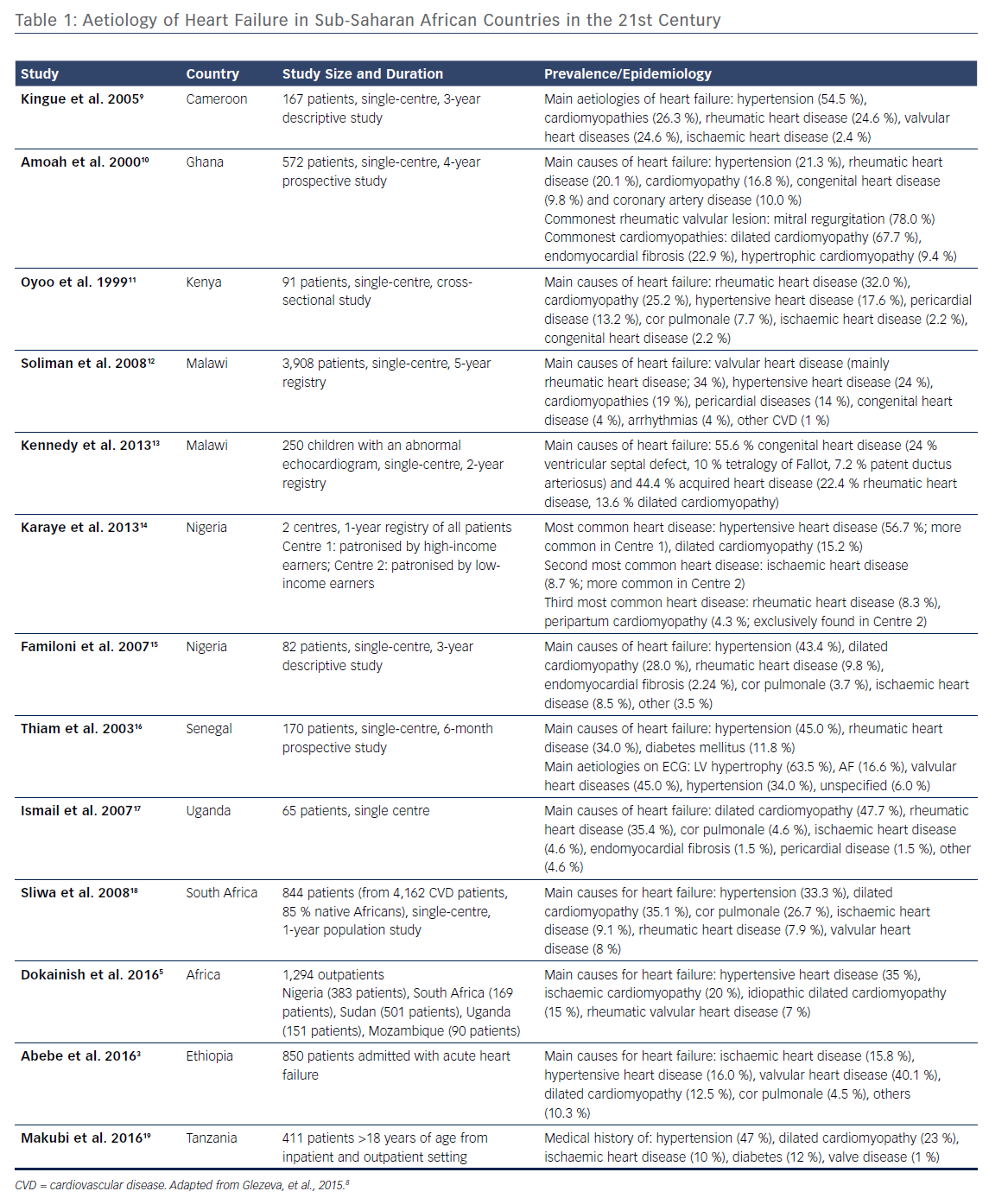 In the absence of sufficient resources, an effective approach to perform large-scale risk-profiling of patients would be the implementation of a point-of-care diagnostic test throughout SSA that could be used nationwide when echocardiography facilities are not available or readily accessible. Biomarker diagnostic tests are easy to perform as they do not require specific medical expertise and can be performed in any location as point-of-care tests, and are therefore practical in rural community settings that have limited access to hospitals or medical centres.

The use of natriuretic peptides (NPs) as a tool to rule out heart failure has been implemented in high-income countries33 with success and these tests are also now available as point-of-care tests, which may prove a useful strategy in Africa. NPs are protein biomarkers with established clinical significance for diagnosis and prognosis of cardiovascular disease and heart failure.34 Among them B-type natriuretic peptide (BNP) and N-terminal prohormone BNP (NT-proBNP) have consistently been shown to have the best diagnostic, prognostic and therapeutic clinical benefits in relation to both acute and chronic heart failure.34–36 NPs have also been shown to be superior to echocardiography parameters in risk stratification in hypertension.37 The strength of using inexpensive BNP and NT-proBNP tests for risk stratification of patients with high-risk factors for heart failure was also demonstrated by several clinical studies, including the recently published St Vincent’s Screening to Prevent Heart Failure Study (STOP-HF)38 and the NT-proBNP Selected Prevention of Cardiac Events in a Population of Diabetic Patients Without a History of Cardiac Disease (PONTIAC) study.39 These studies used BNP and NT-proBNP, respectively, to identify a high-risk cohort in a group of individuals with cardiovascular disease or risk factors. By targeting care to these individuals (mostly through enhanced use of renin–angiotensin–aldosterone system modifying therapies and beta-blockers, which are also the keystone therapies in the management of heart failure with reduced ejection fraction, these studies were able to achieve a significant reduction in new onset heart failure and other major adverse cardiovascular events.

In low- and middle-income countries where access to expensive and technical cardiac imaging is likely to remain limited and confined to large population centres there is a potential for NPs to aid in the diagnosis and management of heart failure, particularly in combination with point-of-care echocardiography.

Following diagnosis, it is important that access to appropriate medical therapies is available for patients with heart failure. The World Health Organisation has targeted that medicines to prevent recurrent cardiovascular disease be available in 80 % of communities and used by 50 % of eligible individuals by 2025. However, a recent analysis of the Prospective Urban Rural Epidemiology Study (PURE) data sought to determine the availability of four key cardiovascular medications: aspirin, statin, angiotensin-converting enzyme (ACE) inhibitor and beta-blockers.40 It found that all four medications were available in 62 % of urban and 37 % of rural communities in lower middle-income countries, and in 25 % of urban and one of 30 (3 %) rural communities in low-income countries. The four cardiovascular disease medicines were potentially unaffordable for 0.14 % of households in high-income countries (14 of 9,934 households) but unaffordable for 60 % of low-income countries studied.40

A survey of Kenya and Uganda showed that ACE inhibitors were only available in 51 % of Kenyan and 79 % of Ugandan hospitals. Almost one-third of the hospitals in each country had a stock-out of at least one of the medication classes in the prior quarter.31 A study looking at medication availability in Uganda showed that ACE inhibitors were available in 22.2 % of health facilities overall, varying from 75 % of hospitals to significantly less in health centres (0–75 % depending on area) and private clinics (36.5 %) (p<0.001).41

A recent analysis of the Symptoms and Signs of Heart Failure at Admission and Discharge and Outcomes in the Sub-Saharan Acute Heart Failure (THESUS-HF) data demonstrated that in acute heart failure patients in SSA, symptoms and signs of heart failure improve throughout admission, and simple assessments, including oedema, rales, oxygen saturation, respiratory rate, and asking the patient about general well-being, are valuable tools in patients’ clinical assessments.42 Interestingly echocardiographic parameters had limited prognostic benefit. Heart rate and left atrial size predicted death within 60 days or readmission. Heart rate, left ventricular posterior wall thickness in diastole, and presence of aortic stenosis were associated with the risk of death within 180 days. Echocardiographic variables, especially those of left ventricular size and function, were not found to have additional predictive value in patients admitted for acute heart failure.43

Heart failure in SSA is an increasing issue. There is a need to explore new diagnostic strategies that are implementable in low-income countries with a predominantly rural population. There is also a need to explore management strategies and, in particular, medication supply. Further research is also required in conditions particular to the African region, such as rheumatic heart disease and endomyocardial fibrosis, to ensure these conditions can be effectively managed.