Cancer and cardiovascular disease account for nearly half of all deaths in the US. The majority of cancer therapies are known to cause potential cardiac toxicity in some form. Patients with underlying cardiac disease are at a particularly increased risk for worse outcomes following cancer therapy. Most alarming is the potential for heart failure as a result of cancer treatment, which may lead to early disruption or withdrawal of life-saving cancer therapies and can potentially increase cardiovascular mortality. A multi-disciplinary cardio-oncology approach can improve outcomes through early surveillance, prevention and treatment strategies.

Heart disease and cancer are the two leading causes of death, together accounting for almost 50 % of deaths in the US.1 Unfortunately, the tremendous success in improving cancer survival is often attenuated by downstream cardiovascular complications from cancer therapy. Acute cardiac toxicity may limit the ability to use life-saving cancer therapy and chronic toxicity limits overall survival. As novel agents with more specific targets become available, unanticipated cardiac complications arise. The spectrum of cardiac toxicities is broad, ranging from ischaemia and arrhythmias to hypertension, left ventricular dysfunction (LVD) and the development of clinical heart failure (HF). Notably, there is increasing evidence that suggests an underlying relationship between cancer and the heart, independent of cancer therapies’ effect on left ventricular ejection fraction (LVEF) and heart rate.2,3 HF caused by chemotherapy portends a worse prognosis compared with idiopathic and ischaemic cardiomyopathy,4 highlighting the need for enhanced understanding and management.

There is currently no universally accepted definition of cancer therapyrelated cardiac toxicity; however, several definitions pertaining to specific agents have been proposed. A recent consensus defines cancer therapy-related cardiac dysfunction (CTRCD) as a decrease in LVEF of >10 % to a value of <53 %.5 The Cardiac Review and Evaluation Committee involved in trials with trastuzumab defines cardiotoxicity as a decrease in LVEF that is either global or more severe in the septum and decline in LVEF of at least 5 % to <55 % with signs or symptoms of HF, or a decline of at least 10 % to <55 % without HF signs or symptoms.6 According to the Food and Drug Administration, anthracycline cardiotoxicity is defined as a >20 % decrease in LVEF when the baseline LVEF is normal, or >10 % decrease when baseline LVEF is abnormal.7 The American Society of Echocardiography and the European Association of Cardiovascular Imaging define cardiac toxicity as a decrease in LVEF of >10 %, to a value <53 % confirmed by repeat imaging.5

Anthracylines are a class of chemotherapies that include doxorubicin and daunorubicin, widely used in the treatment of various solid and liquid tumours. Their mechanism of action involves the generation of reactive oxygen species as well as DNA intercalation to impair protein synthesis and inhibition of topoisomerase II, inhibiting DNA repair.8 In contrast to topoisomerase II-alpha, which is located on rapidly dividing cells, topoisomerase II-beta, located on cardiac myocytes is the proposed mechanism behind the cardiotoxicity.9 Anthracycline use has been shown to result in LVD with an incidence of 1–5 %, ranging from acute to late onset.10 Anthracycline-induced HF is thought to be cumulative and dose-dependent, with an incidence reaching 5% at a total doxorubicin dose of 450 mg/m2.11 However, examination of endomyocardial biopsies reveals histopathological changes with doses as low as 240 mg/m2, suggesting that subclinical cardiotoxity may be present as early as the first dose.12

Trastuzumab, a monoclonal antibody targeted against humanised epidermal growth factor receptor 2 (HER2) has played a pivotal role in breast cancer patients whose tumours overexpress HER2. Under normal circumstances, in cardiac myocytes, the HER2 signalling pathway is responsible for adaptation to stress.8 The incidence of LVD with trastuzumab ranges from 2 % to 28 %,10 with a 1.7–4.1 % incidence of HF.13 Other HER2-targeted agents, such as lapatinib and pertuzumab, used in combination with trastuzumab have not shown additive cardiotoxicity.14

Taxanes such as paclitaxel and docetaxel impair cell division through inhibition of microtubule disassembly during mitosis.15 The incidence of HF from docetaxel has been shown to range from 2.3 % to 8.0 %.16 Combination of doxorubicin and paclitaxel resulted in an unanticipated increase in HF, thought to occur from an increase in plasma levels of doxorubicin by paclitaxel. This in turn results in increased anthracycline uptake into the heart.17 The increased risk can be attenuated by increasing the duration between the administration of agents or using docetaxel instead of paclitaxel as an interaction; this was not observed with this combination.17

Alkylating agents such as cyclophosphamide and ifosfamide impair protein synthesis via inhibition of DNA transcription.18 LVD from cyclophosphamide has been shown to occur in 7–28 % of patients, with a risk that is dose-dependent.16

Proteasome inhibitors such as bortezomib and carfilzomib interfere with the degradation of cell cycle proteins, ultimately resulting in cell death. Compared with other tissues, proteasome activity is increased in the heart and thus disruption of protein homeostasis in cardiac myocytes results in cardiotoxic effects, including HF.19 The incidence of HF from bortezomib ranges from 2 % to 5 %.20 In a recent study of patients with relapsed multiple myeloma, the addition of carfilzomib to lenalidomide and dexamethasone resulted in a 6.4 % incidence of HF compared with 4.1 % with lenalidomide and dexamethasone alone.21

Sunitinib is a non-selective inhibitor of vascular endothelial growth factor (VEGF) with multiple downstream target effects such as hypertension, arrhythmia and HF with a reported incidence of 2–11 %.10 Imatinib, an inhibitor of the fusion protein breakpoint cluster region (BCR)/Abelson (ABL) has been instrumental in the treatment of chronic myelogenous leukaemia; however, there has been a reported 0.5–1.7 % incidence of LVD, thought to be caused by mitochondrial abnormalities within cardiac myocytes following treatment with imatinib.10,22

Immunotherapy has played an increasing role in cancer treatment, as targeting inhibitory T cells helps overcome tumour-induced immune evasion. The anti-cytotoxic T-lymphocyte-associated antigen 4 (CTLA-4) antibody, ipilimumab, and the anti-programmed death-1 (PD-1) antibody, nivolumab, have been shown to improve survival in patients with melanoma.23 However, the combination of these agents has been associated with an immune-mediated myocarditis, thought to occur from immune activation of cardiac as well as tumour tissue.24

Various biomarkers have been studied with regard to detection of cancer therapy-related cardiotoxicity.26 While their role is not firmly established, they may provide an additive benefit in the diagnosis of cardiotoxicity, cardiac risk stratification, prevention of cardiac events and assessment of cardioprotective effectiveness. Among cancer patients receiving high-dose chemotherapy, elevations in troponin-I were predictive of a higher incidence of cardiac events and LVEF reduction.27 In children with high-risk acute lymphoblastic leukaemia, increases in N-terminal pro-brain natriuretic peptide (NT-proBNP) were associated with abnormal LV thickness-to-dimension ratio, suggestive of LV remodelling.28 Other studies with natriuretic peptide have not shown similar promise.29–31 Abnormal high-sensitivity C-reactive protein (hs-CRP) was predictive of LVEF decline in breast cancer patients treated with trastuzumab.32

Multigated acquisition (MUGA) scan has been the imaging modality of choice for periodic assessment of LVEF; however, it poses a risk of radiation exposure and provides limited information on systolic and diastolic function.28 Echocardiography with strain imaging enables regional and global assessment of cardiac function, and is more sensitive for subtle damage to myocardial ultrastructure, which is otherwise only confirmed histologically. LVEF is based on assumptions of cardiac geometry, depends on 2D image quality and cannot detect subtle regional alterations in myocardial mechanics.29 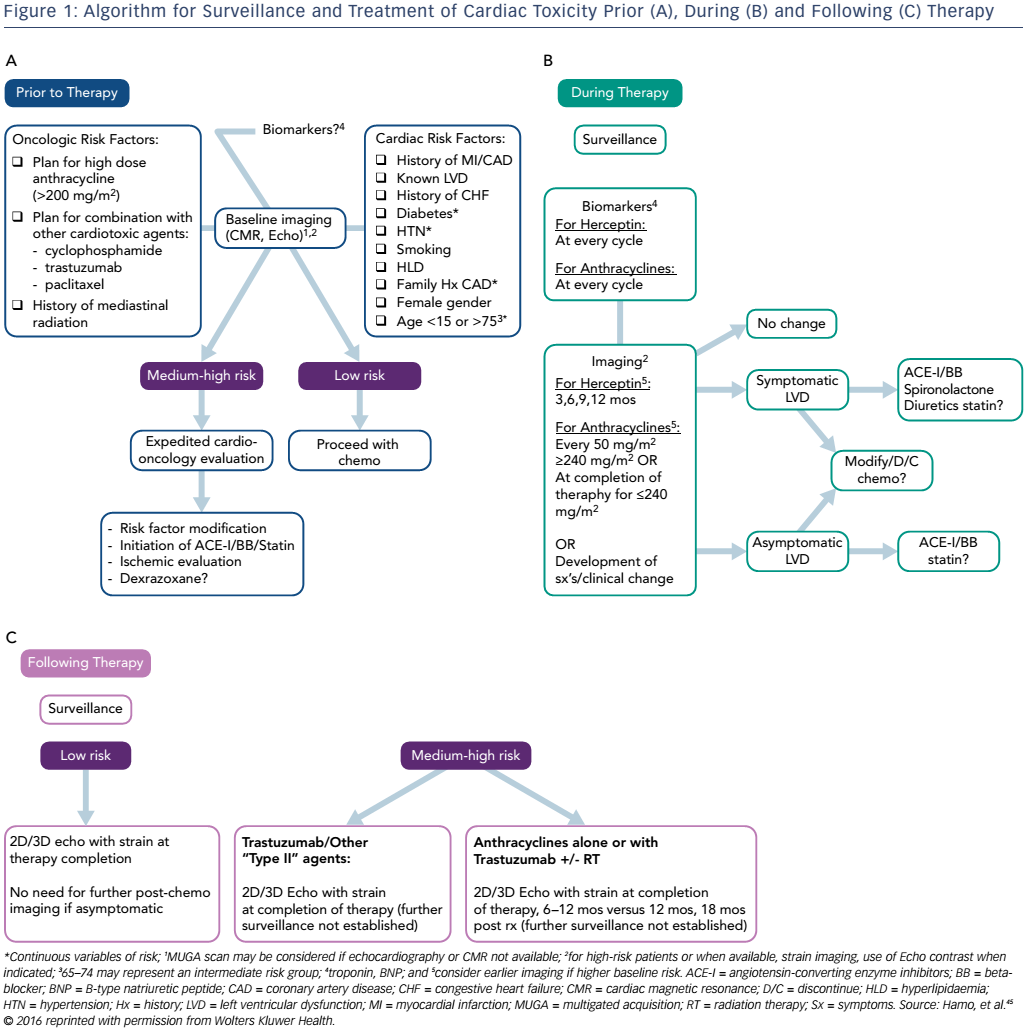 Reduction of longitudinal strain (>10 % from baseline) after three months can predict future reduction in LVEF (after six months) with a sensitivity of 78–79 % and specificity of 79–82 %.30 In patients treated with trastuzumab, a decrease in global longitudinal and radial strain but not LVEF was observed as early as three months in patients who later developed cardiotoxicity.31 In a study of breast cancer patients treated with anthracyclines, systolic dysfunction could be detected with strain imaging within seven days of completing anthracyclines without similar change in LVEF. Furthermore, findings showed that low-dose anthracycline-induced myocardial injury was transient; however, persistently reduced global strain occurred in approximately 16 % of HER2/neu negative patients when systolic strain was reduced ≤-17.2 % at six months following therapy.32 Cardiac MRI is the gold standard of ventricular volume quantification and function, and may play a role in the detection of early as well as late cardiac toxicity.5

Several therapeutic agents including dexrazoxane, statins, angiotensin converting-enzyme (ACE)-Inhibitors and beta-blockers have been shown to be beneficial in reducing cardiotoxicity.33 Patients previously treated with anthracyclines who were given dexrazoxane with anthracycline treatment showed decreased cardiac events, decreased incidence of HF and increased cardiac event-free survival. Additionally, there was a threefold decline in the risk of developing cardiac events, and the risk of developing HF was reduced by 90 %. The proposed mechanisms behind the cardiac protection include reduction of free radical formation as well as prevention of topoisomerase II-DNA complex formation.34,35

The protective effect of antioxidants has been reinforced in animal studies of carvedilol, which has the ability to chelate iron, enabling the prevention of the cardiac histopathology caused by doxorubicin.

Interesting, this same benefit was not seen in other beta-blockers such as atenolol.36 The use of a beta-blocker, initiated before chemotherapy and maintained after treatment, has been shown to preserve LV systolic function.37,38 However, one of these studies was a small prospective trial37 and the other was a retrospective analysis of a larger cohort of patients in which the use of beta-blockers was associated with fewer clinical HF events.38

When used in combination, enalapril and carvedilol, given 1–2 weeks post chemotherapy, increased LVEF recovery. After twelve months, the chance of getting partial LVEF improvement was lost, reinforcing the importance of early treatment.39 In patients receiving chemotherapy with anthracyclines plus or minus trastuzumab, candesartan, given in parallel with cancer therapy reduced LVEF decline.40 Interestingly, in this small clinical trial, the use of the beta-blocker metoprolol succinate was not associated with a reduction in LVEF decline.40 Although the benefit of certain agents has been suggested for prevention of a decrease in LVEF or HF, the data are primarily based on small clinical or observational studies, and as such larger clinical trials are needed to definitively demonstrate the utility of these agents.

Primary prevention and early detection of subclinical toxicity may provide the key to mortality benefit within the field of cardio oncology. Early and diligent surveillance allows for the detection of cardiac dysfunction prior to the development of symptoms and downstream toxicity. Although many algorithms for surveillance have been proposed,5,41–43 there are currently no universally accepted guidelines regarding how to approach these patients. Ideally, a careful screening of oncological and cardiovascular risk factors as well as baseline imaging, inclusive of echocardiography with strain, should occur prior to initiation of potentially cardiotoxic chemotherapy.

Cardiac risk factors include but are not limited to age, female gender, history of myocardial infarction or LVD and tachycardia, as this may be an early sign of cardiac damage.44 Cardiac biomarkers may provide an additive role in this setting. For patients considered to be at higher risk for the development of cardiotoxicity, a cardio-oncology consultation should be offered. In a context of a multidisciplinary approach to cancer care, the cardiac component of the evaluation should not translate to a delay in initiation of cancer therapy. Imaging and biomarker surveillance during and after cancer therapy should be tailored based on individual risk factors.45 According to the Food and Drug Administration, trastuzumab should be withheld for four weeks if the LVEF decreases ≥16 % from pre-treatment values or decreases below normal and ≥10 % absolute decrease in LVEF from pre-treatment values with resumption of chemotherapy once LVEF normalises for the absolute decrease from baseline is ≤15 % within 4–8 weeks.46 Doxorubicin should be discontinued upon development of HF.47 However, guidelines for withholding or stopping cancer therapy in the setting of asymptomatic LVD are not clearly delineated (see Figure 1).

Whether patients with pre-existing cardiovascular disease require cancer therapy with potentially cardiotoxic agents or previously healthy patients develop cardiac complications from cancer therapy, a collaborative patient-centred approach between the cardiologist and oncologist is essential to successful patient care. The rapid and vast advancement in cancer therapies suggests that we are perhaps only witnessing the beginning of what can be expected in the realm of downstream cardiovascular complications. The overarching goal of a cardio-oncology partnership should encompass a multifaceted approach to best facilitate early detection and appreciation of subclinical toxicity to enable successful uninterrupted completion of cancer therapy and prevent cardiovascular mortality.