As the population ages, the incidence of both AF and heart failure (HF) will continue to increase. By the year 2030, there will be an estimated >12 million patients with AF and >8 million patients with HF.1,2 A significant proportion of patients with HF have reduced (<50 %) left ventricular ejection fraction (heart failure with reduced ejection fraction, HFrEF) and the coexistance of AF in patients with AF and HFrEF has been associated with worse outcomes. Patients with HFrEF are predisposed to developing AF since neurohormonal changes and increased LV filling pressures can lead to LA dilation and fibrosis, facilitating AF progression. The development of AF in patients with severe HF is associated with a multitude of negative endpoints compared with patients without AF, including lower functional class, worse peak oxygen consumption, decreased cardiac output and worse mitral and tricuspid regurgitation.3

New-onset AF in patients with HF has also been associated with increased mortality and HF hospitalisations.4 Determining whether AF is a major driver of HF versus simply a marker of worsening HF is important to identify which patients are likely to derive the most benefit from a rhythm control strategy. After adjusting for concomitant risk factors and comorbid conditions, the majority of randomised controlled trials have found that AF is not an independent predictor of mortality in patients with HF. The presence of AF in patients with HFrEF can potentially worsen HF symptoms in several ways. First, the loss of atrial kick during AF can result in decreased LV filling and, therefore, cardiac output. Second, the irregularity of the ventricular response during AF is associated with reduction in cardiac output, a phenomenon that appears to be independent of heart rate.5 Prolonged periods of uncontrolled tachycardia with rapid AF have been well known to result in tachycardia-induced cardiomyopathy, and left ventricular ejection fraction (LVEF) may recover in some patients with adequate rate control.6 Finally, atrial structural changes may occur in the setting of persistent AF, in some cases leading to mitral annular dilation and resultant “atrial functional mitral regurgitation”, which can be reversible with restoration of sinus rhythm.7,8

Guidelines recommmend the use of beta-blockers, angiotensin-converting enzyme inhibitors, angiotensin II recepter blockers, aldosterone antagonists and, more recently, angiotensin receptor–neprilysin inhibitors as medical therapy for patients with symptomatic HFrEF, and these medications are associated with improved mortality.9 Patients with AF and HFrEF have a significantly higher risk of stroke or systemic embolism, as well as overall mortality compared with patients with both AF and HF with preserved ejection fraction (HFpEF) or without HF.10 As such, the presence of HF merits one point with the CHADS2 and CHA2DS2-VASc risk scores and thus oral anticoagulation is usually recommended for stroke prophylaxis, as per guidelines.11

Due to potential for pro-arrhythmia, the choice of anti-arrhythmic drugs for AF is limited to amiodarone and dofetilide in patients with HFrEF, as per the 2014 American Heart Association/American College of Cardiology/Heart Rhythm Society guidelines.11 Dronedarone is contraindicated in patients with New York Heart Association (NYHA) class III–IV HF or severe LV dysfunction (LVEF <40 %) as its use has been associated with increased early mortality due to HF worsening.16 Vaughan–Williams classification class Ic agents have negative inotropic effects and should thus be avoided in patients with HFrEF.11 Sotalol should also be avoided in patients with HFrEF due to increased likelihood of torsades de pointes, particularly in patients with concomitant renal failure.11 Dofetilide was studied in the Danish Investigations of Arrhythmia and Mortality on Dofetilide in Congestive Heart Failure (DIAMOND-CHF) trial, which randomised 1,518 patients with HF and LV dysfunction to dofetilide versus placebo. The study showed that dofetilide was more effective in converting AF to sinus rhythm and maintaining sinus rhythm compared with placebo and dofetilide reduced the risk of HF hospitalisation (RR 0.75, 95 % CI [0.63–0.89]).17 Although there was no overall difference in mortality compared with placebo among all patients, a post hoc analysis suggested significant reduction in mortality among patients with normal baseline QTc treated with dofetilide compared with patients randomised to placebo.18 Amiodarone is the most effective anti-arrhythmic drug (AAD) to maintain sinus rhythm, but is also associated with several side effects with long-term use including multiple organ toxicities that may as a result actually increase likelihood of non-cardiac mortality, as was suggested by the Sudden Cardiac Death in Heart Failure Trial (SCD-HeFT), which included patients with NYHA class III HF.19,20 The Atrial Fibrillation and Congestive Heart Failure (AF-CHF) trial randomised 1,376 patients to rate control versus rhythm control (>80 % with amiodarone) and showed that rhythm control was associated with an increased rate of hospitalisation and no mortality benefit.21

Maintainence of sinus rhythm has been associated with improved mortality and decreased all-cause and heart failure hospitalisations in patients with AF and HFrEF.22 However, the optimal strategy for rhythm control remains controversial. Since the efficacy of AADs remains suboptimal in patients with HFrEF, catheter ablation has become an increasingly utilised treatment strategy. The decision of whether to perform catheter ablation in patients with HFrEF should be individualised, weighing the potential long-term benefits of successful ablation against the risks of intra-procedural complications. Importantly, certain individual patient characteristics such as larger left atrial volume may predict AF recurrence after ablation.23 There is a growing body of literature supporting AF ablation for patients with HFrEF, with a large number of retrospective observational studies and several randomised controlled trials in addition to many meta-analyses. Based on these data, the 2017 Heart Rhythm Society/European Heart Rhythm Association/European Cardiac Arrhythmia Society/Asia Pacific Heart Rhythm Society/Latin American Society of Cardiac Stimulation and Electrophysiology expert consensus statement on AF ablation recommends that it is reasonable to use similar indications for AF ablation in selected patients with HF as for patients without HF (class IIa, level of evidence B-R). 24 The optimal ablation strategy for patients with HFrEF remains controversial. Achievement of electrical pulmonary vein isolation (PVI) (Figure 1) should be performed for all AF ablations (class I, level of evidence A) and may be adequate especially in patients with paroxysmal AF. However, especially among patients with non-paroxysmal forms of AF, the benefit additional ablation with lesions sets such as empirical linear ablation, posterior wall isolation and targeting of non-pulmonary vein triggers, complex fractionated atrial electrograms or rotors remains unclear. Prior prospective studies (in non-HFrEF patients) have not shown benefit of additional empirical linear ablation or targeting of complex fractionated atrial electrograms on top of PVI alone in patients with non-paroxysmal AF.25,26

There have been numerous retrospective observational studies examining outcomes of catheter ablation for AF in patients with HFrEF.27–47 Although most these studies are single-centre experiences with relatively small (<100 patients) sample sizes, ablation has been shown to be relatively safe in patients with HFrEF and successful ablation has in general been associated with improved LVEF, improved quality of life and functional capacity.27 Table 1 summarises the findings of these observational studies.

Most randomised controlled trials have demonstrated overall benefit with ablation.48–53 However, there has been one notable exception: a study by MacDonald et al. published in 2011 randomised 41 patients with persistent AF and HFrEF (LVEF <35 %, NYHA class II–IV) to AF ablation versus medical therapy and found no difference in LVEF improvement, N-terminal pro-brain natriuretic peptide level, 6-minute walk distance or quality of life.54 Importantly, in this study, only 50 % of patients remained in sinus rhythm at 6 months and there was a 15 % complication rate in the ablation group.

Jones et al. randomised 52 patients with LVEF ≤35 % and persistent AF to ablation versus rate control.49 Overall, 88 % of patients in the ablation group were in sinus rhythm at the end of the study (68 % single procedure success). The primary endpoint of peak oxygen consumption was significantly higher in the ablation group. Furthermore, significant improvements in Minnesota score and B-type natriuretic peptide (BNP) level were seen in the ablation group as well as a non-significant trend towards benefit in 6-minute walk distance and LVEF.49 In the Catheter Ablation versus Medical Treatment of Atrial Fibrillation in Heart Failure (CAMTAF) trial, Hunter et al. randomised 50 patients with persistent AF and LVEF <50 % to ablation versus rate control. At 6 months, those randomised to ablation had 81 % freedom from recurrent AF off AADs and improved LVEF, peak oxygen consumption and Minnesota score compared with the rate control arm.50 in the Ablation versus Amiodarone for Treatment of Persistent Atrial Fibrillation in Patients with Congestive Heart Failure and an Implanted Device (AATAC) trial, Di Biase et al. randomised 203 patients with persistent AF, dual-chamber or biventricular implantable cardioverter defibrillator (ICD) and HFrEF (LVEF ≤40 % and NYHA class II–III) to ablation versus amiodarone.51 The primary endpoint was AF recurrence and secondary endpoints were all-cause mortality and unplanned hospitalisations. Despite a wide range of single-procedure success rates between centres (29–61 %), those randomised to ablation were more likely to be in sinus rhythm after single and multiple procedures. Over 2 years of follow-up, the ablation group had lower rates of hospitalisation (31 versus 57 %, p<0.001) and mortality (8 versus 18 %, p=0.037) compared with those randomised to amiodarone.51 In the Catheter Ablation versus Medical Rate Control in Atrial Fibrillation and Systolic Dysfunction (CAMERA-MRI) trial, Prabhu et al. randomised 68 patients with persistent AF and LVEF ≤45 % to ablation versus rate control and found that the ablation group were more likely to have improved LVEF.52 They also demonstrated that absence of late gadolineium enhancement on pre-procedural MRI predicted greater improvement in LVEF and normalisation of LVEF at 6 months. Catheter Ablation versus Standard Conventional Treatment in Patients with Left Ventricular Dysfunction and Atrial Fibrillation (CASTLE-AF) is the most recent randomised controlled trial, where patients with paroxysmal or persistent AF and HFrEF (<35 %) and ICD (with home monitoring capability) were randomised to either ablation or conventional medical therapy for AF.55 The primary endpoint was a composite of all-cause mortality and unplanned hospitalisation for worsening HF. Over median follow-up of 37.8 months, those randomised to ablation were significantly less likely to experience the composite primary endpoint (28.5 % versus 44.6; HR 0.62, 95 % CI [0.43–0.87]; p=0.007) than controls. Those in the ablation group were also less likely to meet the secondary endpoints of all-cause mortality (13.4 % versus 25 %; HR 0.53, 95 % CI [0.32–0.86]; p=0.011) or HF hospitalisation (20.7 % versus 35.9 %; HR 0.56, 95 % CI [0.37–0.83]; p=0.004) than controls. 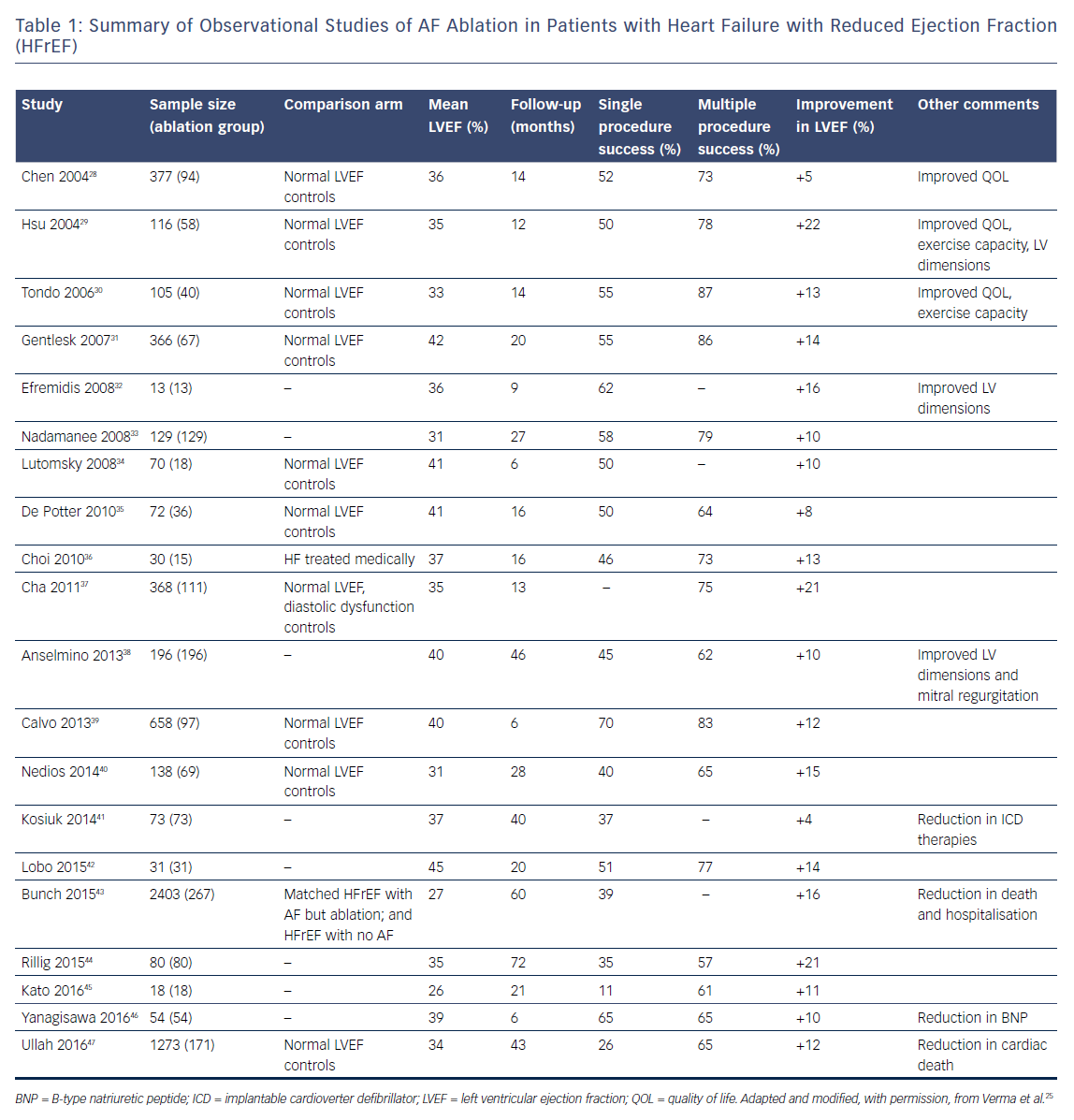 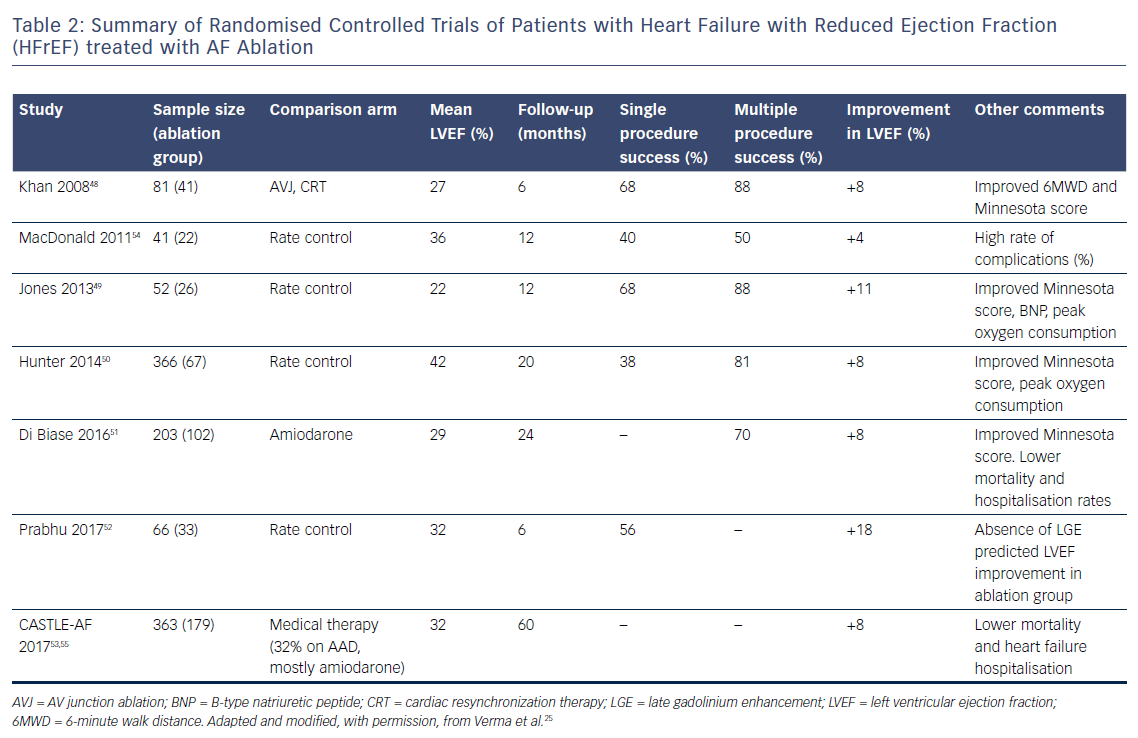 A number of meta-analyses have examined the benefit, efficacy and safety of catheter ablation for patients with HFrEF, all of which have suggested AF ablation to be safe, effective and beneficial in this patient population.56–59 Anselmino et al. pooled data for 1,838 patients from 26 studies (randomised controlled trials, clinical trials and observational studies) and found that over mean follow-up of 23 months, there was a 4.2 % complication rate and 60 % of patients maintained sinus rhythm over long-term follow-up.56 AF ablation resulted in significant improvement in LVEF (13 %) and reduction in BNP (620 pg/ml). Wilton et al. included eight studies of 1,851 patients in their meta-analysis comparing efficacy and safety of AF ablation in patients with reduced verses normal left ventricular systolic function.57 Freedom from recurrent AF after a single procedure was achieved in 28–55 % of patients with HFrEF; although allowing for multiple procedures, this number increased to 64–96 % (mean 1.4 procedures). There was no difference in rates of complications between groups and there was an 11 % improvement in LVEF in patients in the HFrEF group after AF ablation.

Significant interplay exists between AF and HFrEF. Catheter ablation can be safely performed and is effective in maintaining sinus rhythm in patients with HFrEF, although multiple ablations may be necessary to achieve long-term freedom from AF. Successful ablation may result in improved LV function, clinical heart failure status and quality of life, as evidenced by lower BNP levels and improved peak oxygen consumption, Minnesota score and 6-minute walk distance. As such, AF ablation should be considered as an adjunctive treatment strategy for patients with HFrEF.