The emergency department (ED) plays a key role in the initial diagnosis and management of acute heart failure (AHF). Despite the advent of novel biomarkers and traditional methods of assessment, such as history, examination, and chest X-ray, diagnosis of the dyspnoeic ED patient is, at times, very challenging. Focused cardiac and pulmonary ultrasound has emerged as a valid, facile and efficient method to aid in the initial diagnosis and management of AHF.

The emergency department (ED) plays a critical role in the initial diagnosis and management of acute heart failure (AHF),1,2 as nearly 80 % of all AHF admissions originate from the ER.3 However, patients do not present with a diagnosis; rather they present with a chief complaint reflecting signs and symptoms – most commonly breathlessness. Differentiating AHF from other causes of breathlessness can be challenging, especially in patients with multiple co-morbid conditions such as chronic heart failure and chronic obstructive pulmonary disease (COPD). Failure to diagnose correctly leads to delays or mistreatment, potentially leading to worsened outcomes. Determining whether breathlessness is cardiac or non-cardiac in origin is a critical step in management.

In this article, the authors review the role of focused cardiac and pulmonary ultrasound in the diagnosis and management of dyspnoeic emergency patients, with a specific focus on AHF. Importantly, point- of-care cardiac ultrasound does not replace formal echocardiography (ECG).4,5 As the training requirements for focused ultrasound are beyond the scope of this review, readers should refer elsewhere.6,7

A 68-year-old man presents to the ER complaining of shortness of breath for the past three days, progressively worsening. He has a low-grade fever and his initial vital signs are as follows: HR 109, BP 158/81, RR 20, Sa02 97 % on room air. He has a history of coronary artery disease with two stents placed two years ago. He also has a long history of smoking and has COPD. He has no known history of heart failure but does report increase dyspnoea on exertion, but denies paroxymal nocturnal dyspnoea and orthopnoea. On examination, he is in mild distress, but able to speak in complete sentences. His heart is regular, but fast with no murmurs, gallops or rubs. Faint expiratory wheezes bilaterally are audible. He is mildly obese and jugular venous distention is not ascertained, despite hepatic pressure. He has trace pitting oedema bilaterally. Electrocardiogram (ECG) shows sinus tachycardia, but no acute ischaemic changes.

AHF is a clinical diagnosis. Similar to other diagnostic studies, such as chest radiography and biomarkers, ulstrasound is not intended to be a stand-alone test. Rather, focused ultrasound should be incorporated into the overall diagnosis and management of the AHF patient. The primary purpose of point-of-care cardiac and pulmonary ultrasound is to aid in clinical management. It may allow for earlier diagnosis of AHF and potentially identify alternative etiologies of acute dyspnoea. In other words, focused ultrasound may facilitate the correct diagnosis.4,6,8–13

The authors recommend performing focused ultrasound during the initial encounter with the patient. Assuming critical life-saving interventions or immediate resuscitation are not required, focused ultrasound occurs immediately after the history, physical examination and ECG. As discussed in detail below, multiple studies demonstrate the utility of ultrasound to improve diagnostic accuracy in dyspnoeic ED patients.

One of the most valuable and easiest to perform ultrasound assessments is lung ultrasound (LUS) looking for B-lines. LUS is performed using a low-frequency transducer – phased-array, microconvex or curvilinear probe – to allow for greater penetration and visualisation of B-lines.14,15 B-lines are vertical echogenic artifacts that originate from the pleural line, extend to the bottom of the ultrasound screen and move with lung sliding (see Figure 1).15,16 They are generated by water-thickened interlobular septa and may be seen in a variety of lung pathologies including pulmonary oedema.16–18 In the clinical setting of suspected AHF, pulmonary oedema is determined sonographically, using an eight-zone scanning technique, as greater than three B-lines in a rib space in at least two lung zones bilaterally.19,20 This finding on LUS is highly sensitive for the diagnosis of AHF, can be used to differentiate AHF from chronic obstructive pulmonary disease (COPD)14,16,18,21–24,10,25,26 and has better diagnostic accuracy for AHF than chest X-ray.15,27,28 In small studies, B-lines correlate well with natriuretic peptide levels8 and wedge pressure,28 though a more recent study shows only a modest correlation with filling pressures.29 In addition, LUS evaluation of B-lines is non-invasive, facile, feasible and has high inter-rater agreement.20,25 An alternative scanning protocol, counting the number of B-lines in 28 total rib spaces bilaterally, may allow for a more precise quantification of pulmonary oedema.30,31 In AHF patients, B-line assessment aids in diagnosis and may guide acute management.13,17 Protocols that combine lung and cardiac ultrasound have been found to be highly accurate for diagnosing AHF13,32 and potentially more accurate than LUS alone.13 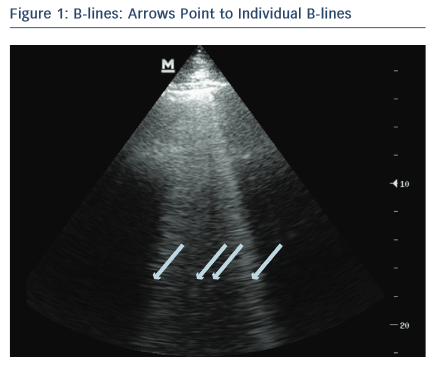 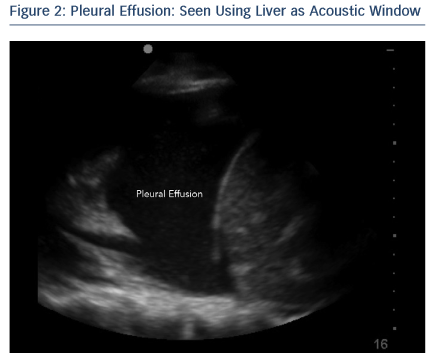 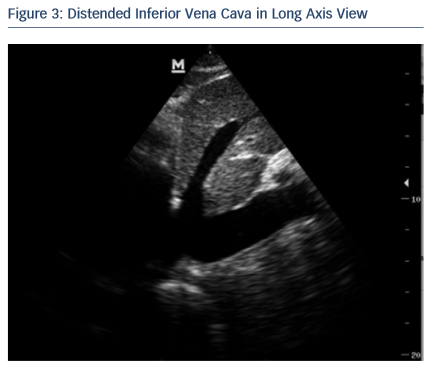 Measurement of inferior vena cava (IVC) diameter, along with its variability with respiration to determine intravascular volume status, has been described for decades.34 IVC measurement and changes with respiration correlate with right atrial and central venous pressures.35–38 As use of has become more widespread, measurement of IVC to determine fluid responsiveness in multiple patient populations has become more commonplace.39,40 IVC size and collapsibility index should be measured in long axis caudal to the hepatic vein inlet, or in short axis at the level of the left renal vein (see Figure 3).41 In general, IVC size and collapsibility with respiration is most valuable at the extremes (volume overloaded – no collapse during inspiration, or volume depleted – positive inspiratory collapse) as a qualitative finding (see Figure 4). In a euvolemic patient, the IVC partially collapses during inspiration, reflecting negative intrathoracic pressure. Importantly, this applies only to patients breathing spontaneously. In mechanically ventilated patients, the opposite occurs during a respiratory cycle; during expiration, the negative intrathoracic pressure leads to partial collapse in a euvolemic patient. In patients who present with acute dyspnoea, a minimal change in IVC diameter with respiration may predict volume overload and helps to differentiate AHF from COPD.42,43

Ultrasound-trained emergency physicians can accurately determine left ventricular ejection fraction (LVEF) using both visual estimation and mitral E-point septal separation (EPSS) with good inter-rater reliability.44–46 Even with limited training, emergency physicians accurately estimate LVEF.47 However, EPSS is limited by septal wall motion abnormalities, mitral valve stenosis and angle of evaluation.48 Thus, the authors recommend EPSS be used in conjunction with other methods. If only a qualitative assessment of EF is desired, EPSS may be used to confirm visual estimation. International evidence-based recommendations advocate focused cardiac ultrasound be used to assess left ventricle dimensions and systolic function.6 Although a reduced EF in the setting of AHF signs and symptoms facilitates the diagnosis, the absence of a reduced EF does not rule it out. As nearly 50 % of patients with heart failure have a preserved EF, knowledge of the EF itself does not significantly alter acute management in the ER setting. The vast majority of AHF patients receive intravenous loop diuretics with a much smaller proportion receiving vasodilators. These treatments are given to AHF patients irrespective of EF and, at the present time, no robust evidence exists to suggest initial pharmacological management in the ER should differ based on EF.

Thus, ultrasound imaging of the heart may be more valuable to ‘rule-out’ other diagnoses rather than ‘ruling-in’ AHF. For example, presence of a significant pericardial effusion or right ventricular (RV) dilatation might suggest alternative diagnoses such as tamponade or pulmonary embolism.

Ultrasound findings must be interpreted in clinical context. Although B-lines in the setting of a history and examination consistent with AHF most likely represent pulmonary congestion, B-lines lack specificity and are seen in multiple other conditions; for example, non-cardiogenic pulmonary oedema, pulmonary fibrosis, pneumonia, pneumonitis, and lung cancer.18,22,25 Ensuring that B-lines are bilateral helps to differentiate AHF from other etiologies. Absence of B-lines in one hemi-thorax greatly lowers the probability of AHF.

Some limitations in determining volume overload by measuring IVC diameter variability include etiologies that increase right atrial pressure outside of acute heart failure, such as pulmonary emboli, pulmonary hypertension, and cardiac tamponade. These examples highlight the importance of clinical context, as well as radiographic and biomarker features. In addition, these examples reveal the potential pitfall of examining the IVC only, rather than examining additional views of the lung and the heart.

As nearly half of heart failure patients have a relatively preserved EF, the condition is not excluded despite a normal EF.

While LUS is one of the easiest assessments to perform, IVC and LVEF evaluation may require some additional training; however, this is still well within the realm of many specialties.49,50 Importantly, focused cardiac ultrasound does not replace formal ECG;5 instead, focused bedside ultrasound aids in the diagnosis and management of many conditions, including AHF. 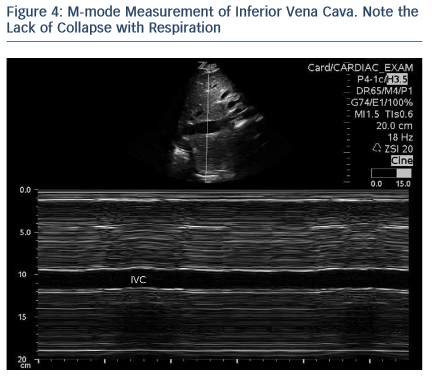 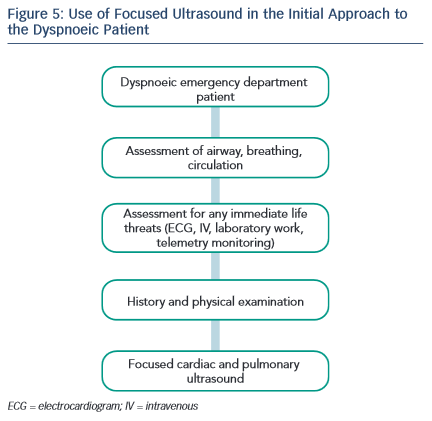 Multiple studies support the added value of a focused ultrasound to facilitate a diagnosis of AHF, but it remains infrequently used. As ultrasound devices become increasingly smaller and familiarity with focused ultrasound increases, its use will continue to grow. However, there are limited studies evaluating the utility of ultrasound to guide management and prognosis in the ER setting. Small studies have shown the efficacy of LUS to measure resolution of extra-vascular lung water or B-lines.17,51 Ongoing work in this area may demonstrate a future role for ultrasound to guide the management of AHF.

The ED plays a pivotal role in the initial management of AHF. Correct diagnosis and treatment is critical to ensure the right tone is set for subsequent in-hospital or outpatient management. As patients present with symptoms and signs and not diagnoses, AHF may be missed, especially in patients with other co-morbid conditions. Focused ultrasound is a fast, non-invasive method that rapidly aids the clinician to rule in or rule out various cardiac and pulmonary diagnoses. Importantly, focused ultrasound must be interpreted within the clinical context. For potential AHF patients, the use of LUS to assess for B-lines and pleural effusions, cardiac ultrasound to assess EF and measure IVC diameter and respiratory variation are skills that may be learned quickly and can aid the clinician.

Given the patient’s history of coronary artery disease, AHF is on the differential diagnosis list – but so are acute coronary syndrome, COPD, and pneumonia. The ECG shows sinus tachycardia, but no other acute ischaemic changes. While awaiting chest X-ray, a focused ultrasound is performed, starting with the lungs (see Figure 5). Four or five B-lines are noted in at least two zones bilaterally, raising suspicion of pulmonary congestion. There are no pleural effusions. Cardiac examination does not show any pericardial effusion or RV dilation and systolic function appears mildly depressed by qualitative assessment. IVC assessment is difficult given the patient’s habitus, but minimal respiratory collapse is observed, suggesting elevated venous pressures. Based on this evidence, treatment is given for AHF. Chest X-ray reveals mild cardiomegaly, mild vascular engorgement, no Kerley B-lines, and no consolidation.