Patients with type 2 diabetes are at increased risk of developing heart failure, cardiovascular death and renal failure. The recent results of three large sodium-glucose cotransporter 2 inhibitor cardiovascular outcomes trials have demonstrated a reduction in heart failure hospitalisation and progressive renal failure. One trial also showed a fall in cardiovascular and total death. A broad spectrum of patients with diabetes benefit from these salutary effects in cardiac and renal function and so these trials have important implications for the management of patients with type 2 diabetes. Selected glucagon-like peptide 1 receptor agonists have also been shown to reduce adverse cardiovascular outcomes.

With progressive ageing and the growing incidence of obesity in the population, the prevalence of type 2 diabetes (T2D) has been rising rapidly and has become a major cause of death and disability worldwide.1 It is well established that atherosclerotic cardiovascular disease (ASCVD) and renal failure are responsible for a large majority of deaths in patients with T2D.2-4 Over the past decade, the management of T2D has been undergoing an important transformation from simply targeting abnormally elevated glucose concentration to preventing complications of ASCVD, including heart failure (HF) and the progression of diabetic renal disease.5,6

Several pathophysiological mechanisms may explain the relationship between T2D and HF: T2D is associated with accelerated atherogenesis, which is responsible for macrovascular coronary atherosclerosis leading to MI and impairment of cardiovascular function. Arterial hypertension, which is common in T2D, and the ensuing left ventricular hypertrophy and increased wall stiffness also contribute to the development of HF. Some observations have suggested that T2D may be associated with a specific form of cardiomyopathy, termed diabetic cardiomyopathy, which can lead first to HF with preserved ejection fraction then progressing to HF with reduced ejection fraction.7,8

T2D can also cause microvascular obstruction, which can play an important role in the development and progression of diabetic nephropathy, which is now the leading cause of end-stage renal disease in Europe and North America.9

Disorders of the coronary microcirculation may also contribute to the development of HF with preserved ejection fraction. In addition, the importance of the cardiorenal axis is well established with disorders of either cardiac or renal function causing malfunction in the other organ, leading to a vicious circle.10–13 In addition, HF intensifies the impairment of glucose control in patients with T2D, with the resultant glucotoxicity setting the stage for a second vicious circle.14,15

In a recent cohort study, the Swedish National Diabetes Register, >270,000 patients with T2D were matched with >1,300,000 non-diabetic controls. It showed that T2D patients in whom all five risk factors (HbA1c, LDL cholesterol, albuminuria, smoking and blood pressure) were within the target ranges exhibited similar risks of MI, stroke and death as people who do not have diabetes, but they remained at increased risk for the development of HF.16 From such studies, it has become apparent that the treatment of T2D must not only include control of glucose metabolism and of the well-established risk factors for atherosclerosis but must also reduce the risk of HF and advanced kidney disease.

Concerns about the cardiovascular safety of the widely-used thiazolidinedione rosiglitazone in the first decade of this century prompted the US Food and Drug Administration in 2008 and the European Medicines Agency in 2009 to issue new requirements for approval of antidiabetic drugs.17–19 Specifically, these agencies required the safety of antidiabetic drugs to be demonstrated in well-powered, non-inferiority trials. The resultant trials have both enhanced understanding of the pathobiology of T2D and confirmed that the reduction of HbA1c does not necessarily translate into a reduction of major adverse cardiovascular events.5,6,20 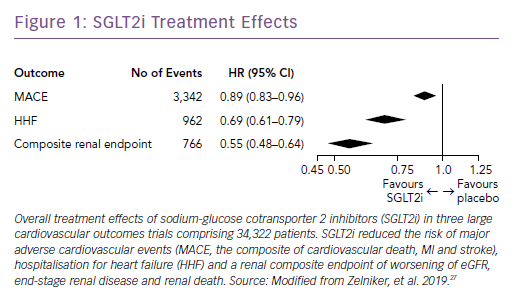 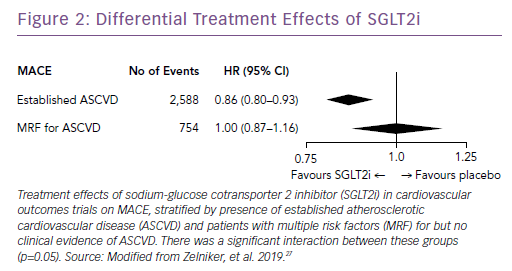 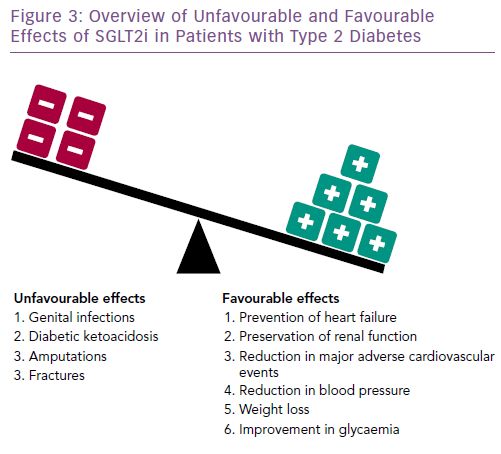 A number of large cardiovascular outcomes trials showed that these agents reduce HbA1c levels and are generally safe.20–23 In contrast, the Empagliflozin Cardiovascular Outcome Event Trial in Type 2 Diabetes Mellitus Patients (EMPA-REG OUTCOME) trial of empagliflozin, a sodium-glucose cotransporter 2 inhibitor (SGLT2i), lowered major adverse cardiovascular events (MACE), the composite of cardiovascular (CV) death, MI and stroke, by a modest, albeit statistically significant 14%, a finding that was, of course, welcomed.24 Unexpectedly, this trial also demonstrated a significant 38% reduction (HR 0.62; 95% CI [0.49–0.77]) in CV death and a 32% fall in all-cause death. A significant 35% lowering in hospitalisation for HF was also observed, indicating that the improvement in cardiac pump function was primarily responsible for these reductions of CV and all-cause death.

Subsequently, the results of large trials involving two other SGLT2i drugs in patients with T2D were reported: the CANagliflozin cardioVascular Assessment Study (CANVAS) Program with canagliflozin; and the Dapagliflozin Effect on Cardiovascular Events (DECLARE-TIMI) 58 trial, which studied dapagliflozin.25,26 A recent meta-analysis of the three published CV outcomes trials included a total of 34,322 patients with T2D, with 20,650 patients having established ASCVD, and 13,672 patients with multiple risk factors but no clinically apparent ASCVD.27 Overall, SGLT2i reduced the risk of hospitalization for HF and the progression of renal disease in these patients by 31% and 45%, respectively (Figure 1). However, the benefit in reducing atherosclerotic MACE was modest and confined to those with known ASCVD (Figure 2).

Although the precise molecular mechanisms mediating the reduction in adverse cardiovascular and renal outcomes of SGLT2i have not been fully defined (Figure 3), their principal beneficial action appears to result from blockade of the reabsorption of glucose and sodium from the glomerular filtrate by the proximal tubule, leading to their excretion into the urine. This action reduces extracellular fluid volume, which in turn increases hematocrit and lowers cardiac preload, afterload, arterial stiffness, blood pressure and left ventricular mass.28 There is a reduction in epicardial adipose tissue and with it, a number of noxious stimuli.29,30

SGLT2i drugs cause vasoconstriction of the afferent glomerular arterioles and dilatation of the efferent arterioles. These changes in the nephrons’ microcirculation lower the intraglomerular pressure, thereby reducing albuminuria and glomerular fibrosis and delaying the decline in renal function.28,35 However, in two of the three large trials in the SGLT2i meta-analysis, patients with estimated glomerular filtration rates (eGFR) lower than 30 ml/min/1.73m2 body surface area (BSA) were excluded and, in the third, patients with a creatinine clearance <60 ml/min/1.73m2 BSA were excluded. Given the frequency of reductions of eGFR below these values in people with T2D, it is important to determine the efficacy and safety of these drugs in such patients.

SGLT2i drugs are generally well tolerated and safe. However, their glucosuric effect increases the risk of genital infections. An increased risk of fractures and lower limb amputations (predominantly of the toes and metatarsal bones) have been reported with canagliflozin, but not with empagliflozin or dapagliflozin.25 A near doubling of an uncommon complication, diabetic ketoacidosis, has also been observed.27 Initial concerns about an increased risk of bladder cancer have not been borne out.26,27

The salutary effects of SGLT2i on HF in patients with T2D have raised the intriguing question of whether these agents can also be effective in the treatment and/or the prevention of HF in patients with HF without T2D; this question is being addressed by ongoing trials. The form of HF affected in the SGLT2i trials – with reduced and/or preserved ejection fraction – was not defined in the above-mentioned trials and this issue is receiving attention.

In addition to the SGLT2i, three glucagon-like peptide 1 receptor agonists (GLP1-RA) have been shown to be of clinical benefit in T2D cardiovascular outcomes trials. This class of drugs has been used for a number of years to reduce HbA1c.

Liraglutide, semaglutide and albiglutide have been demonstrated to reduce the risk of MACE significantly, with liraglutide also lowering the incidence of CV death.36–38 In addition, a recent press release has stated that the Researching Cardiovascular Events With a Weekly Incretin in Diabetes (REWIND) trial (NCT01394952) studying the CV safety of dulaglutide in a predominantly primary prevention cohort reduced the risk of MACE significantly.39 A press release about the trial Investigating the Cardiovascular Safety of Oral Semaglutide in Subjects With Type 2 Diabetes (PIONEER 6; NCT02692716) reported that oral semaglutide had been proven to be safe and reduced the risk of CV death significantly but it did not meet statistical significance for MACE.40 No significant reduction in hospitalisation for HF or a slowing in the decline of eGFR have been reported for any GLP1-RA to date, although numerical reductions in HF have been seen for both liraglutide and albiglutide.36,38

The most recent guidelines for the treatment of T2D released by the American Diabetes Association and the European Association for the Study of Diabetes begin with a recommendation for lifestyle changes for all patients.41 Metformin remains the primary pharmaceutical agent for reducing HbA1c. This drug is efficacious, well tolerated and inexpensive. If HbA1c remains above target levels despite the above-cited therapy, either an SGLT2i or one of the aforementioned GLP1-RAs with proven benefit should be added.

Based on the finding in the meta-analysis summarised above, which was published after the release of the most recent practice guidelines, the authors of this review recommend the administration of an SGLT2i first, especially in patients with T2D and ASCVD, HF, chronic kidney disease and/or kidney disease and/or multiple risk factors.27 When SGLT2i drugs are not tolerated, contraindicated or do not bring the HbA1c to target levels, the addition or substitution of a GLP1-RA with proven CV benefit should be considered.

Thiazolidinediones have been reported to increase fluid retention and cardiac decompensation and should not be used in patients with HF.42 Caution should also be applied when using certain DPP-4 inhibitors.20

After many neutral findings in CV outcomes trials in patients with T2D, the results of the trials with SGLT2i have shown that drugs in this class cause robust reductions in HF and delay the development of renal failure. Selected GLP-1-RA agents also appear beneficial in reducing atherosclerotic cardiac events in these patients. These two classes of agents are meeting important needs in the management of the growing number of people with T2D.