Well, prior to the trial that I just presented, there was evidence from smaller trials, many of which were done in my laboratory, that treating both obstructive and central sleep apnea improved cardiovascular function by increasing ejection fraction, reducing sympathetic nervous system activity, and also, there's evidence that it improved exercise tolerance on the six-minute walking test. So there was a number of physiological factors that improved, that would suggest that it might improve mortality and hospitalizations as well.

So our new device, it's called adaptive servo ventilation, basically it's like a pacemaker. So if you stop breathing... If you stop breathing and you have a central apnea, the machine will ventilate you, okay? If you don't stop breathing it just provides a low background pressure but doesn't ventilate you. If you have obstructive sleep apnea it increases the pressure, the background pressure, but it doesn't ventilate you, but it just raises the pressure enough to keep the airway open. So it treats both central and obstructive sleep apnea. The device we use is made by Philips Respironics, and it's triggered by what's called peak airflow. So that means that it's aiming, if the peak airflow drops below a certain point it will start to ventilate you or to treat your obstructive sleep apnea, depending upon which type of apnea you have. It's different than the device used in the SERVE trial. The SERVE trial used a device that was triggered by minute ventilation, and it was a more aggressive device with higher background pressures. And in the SERVE-HF trial, which was published in 2015, they found that that ventilator actually caused an increase in mortality and therefore it's not used for that indication anymore. So that's the device we use and its different from the other one.

The study population was men and women, adults, with low ejection fractions, below 45%, with a history of heart failure who were on stable medication and were stable clinically. And so basically that's the population we aimed for, yeah.

Key findings were that in the 731 patients that we analysed, the group randomised to the device had a marked reduction in their apnea hypopnea index. So it completely got rid of their sleep apnea over the entire five year course of the trial. And it didn't matter whether they had obstructive or central, it treated both. However, there was no significant difference in the primary endpoint, which was the combination of cardiovascular hospitalizations, death from any cause, atrial fibrillation, atrial fibrillation and ICD discharges. There was no significant difference between the two groups. And it didn't matter whether they had obstructive or central, it didn't make any difference. On the other hand it didn't cause any harm, which... So it's unlike SERVE in which patients actually had a higher mortality, in our trial they didn't. If we looked at mortality alone there was no significant difference, again between the two groups, either obstructive or central or the whole group. On the other hand, in the central group, we had fewer patients that we had anticipated because in 2015, when the SERVE trial results were published regulatory authorities in Germany and France disallowed enrollment of patients with central sleep apnea despite the fact our data and safety monitoring committee had seen no safety signal at all. So they overruled our data and safety monitoring committee. So there's a major ethical problem here. And as a result, instead of getting 430 patients with central apnea, we only got 198. In that group there was a trend towards a lower mortality. The hazard ratio was 0.78, which means a 22% reduction in mortality rate. But the P value was 0.34, so it wasn't significant. On the other hand, that difference between the two groups is a difference we predicted when we created the sample size. So the conclusion then would be that there's no indication to treat... Oh yes, sorry. The other point was the patients with obstructive apnea had to be non-sleepy, because if they were sleepy they would have an indication to be treated. So in non-sleepy patients with OSA there's no indication for them to be treated if they have heart failure because we don't have any indication that improves their outcomes. In the central apnix, there's a trend towards improvement, but not significant. So there's no indication therefore to treat them either. However, the quality of life data have yet to come out, and if the quality of life data show an improvement, and we've shown that the device is safe then there may be an indication to treat people who are... Who have bad heart failure that's relative refractory to drug and device therapy.

I don't, at the moment. With the findings we have I don't think it will have a big impact except that cardiologists will be more reluctant to send patients for sleep studies because we don't have any evidence that treating the non-symptomatic patients with obstructive sleep apnea does any good. Similarly with the central apnea, again, depending upon what the quality of life data show, I don't think it's going to have a major impact there either The major impact is that we do show that there's no harm but we also show that there's no statistically significant difference in the major outcomes. Well, in the central apnix with the device we used, again there's a signal there it's just not significant. The problem is funding these trials, right? So these trials are funded in this case by Phillips Respironics and by our Canadian Institutes of Health Research by a peer reviewed grant. But we don't have the kind of money that pharmaceutical firms have. And so it's very difficult for us to do studies with thousands of patients, because we just don't have the money. If I had the money I would've extended the trial in the central apnix because we still have equipoise there. And, you know, if we got four or 500 patients we might see a difference. So if somebody wants to do it, I'm near retirement so it's not going to be me, but there is a signal there, and if somebody wants to follow that up, they should do that. But I suspect they're going to have a hard time getting funding for it. 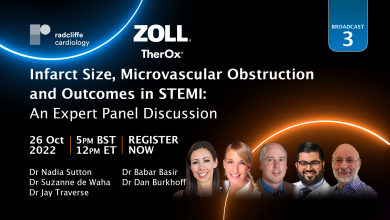 Infarct Size, Microvascular Obstruction and Outcomes in STEMI: An Expert… 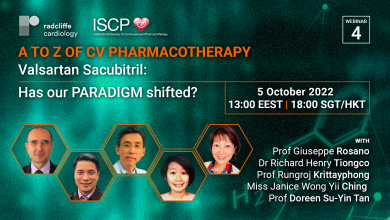