Advances in diagnosis and treatment have improved the outlook for the estimated 26 million patients with heart failure (HF) worldwide,1 but there remains a continuing need for further reduction in mortality and hospitalisation and the associated social and financial consequences of the disease. In a European study of outcomes after HF hospitalisation, 17 % of patients died within 12 months and 44 % were rehospitalised,2 and the most recent data from the British National Heart Failure Audit showed in-hospital mortality of 8.9 % and mortality at 1 year of 26.7 % in those surviving to leave hospital.3 Patients are at greatest risk in the first 30 days after hospitalisation,4 though there is some evidence that good adherence to HF treatment guidelines may improve clinical outcomes.5

The latest HF guidelines from the European Society of Cardiology (ESC) recommend key pharmacological therapies for patients with HF with reduced ejection fraction (HFrEF) in order to reduce mortality and hospitalisation.6 These include angiotensin converting enzyme inhibitors (ACEIs), angiotensin receptor blockers (ARBs) if ACEIs are not tolerated, beta blockers (BBs), mineralocorticoid receptor antagonists (MRAs), ivabradine for patients in sinus rhythm with a heart rate ≥70 bpm, and sacubitril/valsartan as a replacement for ACEIs in ambulatory patients with HFrEF who remain symptomatic despite optimal ACEI, BB and MRA treatment (Figure 1).6

Yet, even when prescription levels of guidelines-based HF treatment are high, patients may fail to reach target doses of potentially lifesaving medicines,7 and there is some evidence that suboptimal dosing may adversely influence outcomes.8,9

QUALIFY: A Global Perspective on Physicians’ Adherence to HF Guidelines

QUALIFY is an international, prospective, observational, longitudinal survey of physicians’ adherence to ESC guidelines recommendations for five key classes of HF medications at the time the study was initiated – ACEIs/ARBs, BBs, MRAs and ivabradine.11

Physicians’ adherence scores and follow-up data have been reported for 6,669 patients with chronic heart failure and left ventricular ejection fraction ≤40 % who had been hospitalised for worsening HF in the previous 1–15 months.12 Patients were treated at 547 centres in 36 countries in Africa, Asia, Australia, Europe, the Middle East and North, Central and South America (Figure 2).10,12

The focus of QUALIFY was on physicians’ adherence to HF guidelines and did not include patient adherence to prescribed treatment. The adherence score used in QUALIFY was the ratio of the treatment actually prescribed to the treatment that should theoretically have been prescribed. The latter took account of eligibility criteria, guidelines-based contraindications to drugs or treatments and use in ≥50 % of recommended dosages. Target doses were defined by ESC guidelines when available11 and, in the case of ivabradine, according to the therapeutic regimen used in the systolic HF treatment with the I(f) inhibitor ivabradine trial.13 For each medicine, a patient was scored 0 points for non-prescription in the absence of contraindications, 0.5 points for the use of <50 % of target dosage (TD) (<100 % of TD for MRA as most patients received ≥50 % of TDs of MRA) or 1 point for use in ≥50 % of TDs (TD for MRA). Physicians’ adherence scores ranged from 0 (very poor) to 1 (excellent) and were defined at three levels: good adherence (score=1); moderate adherence (score=>0.5 to <1); and poor adherence (score=≤0.5). 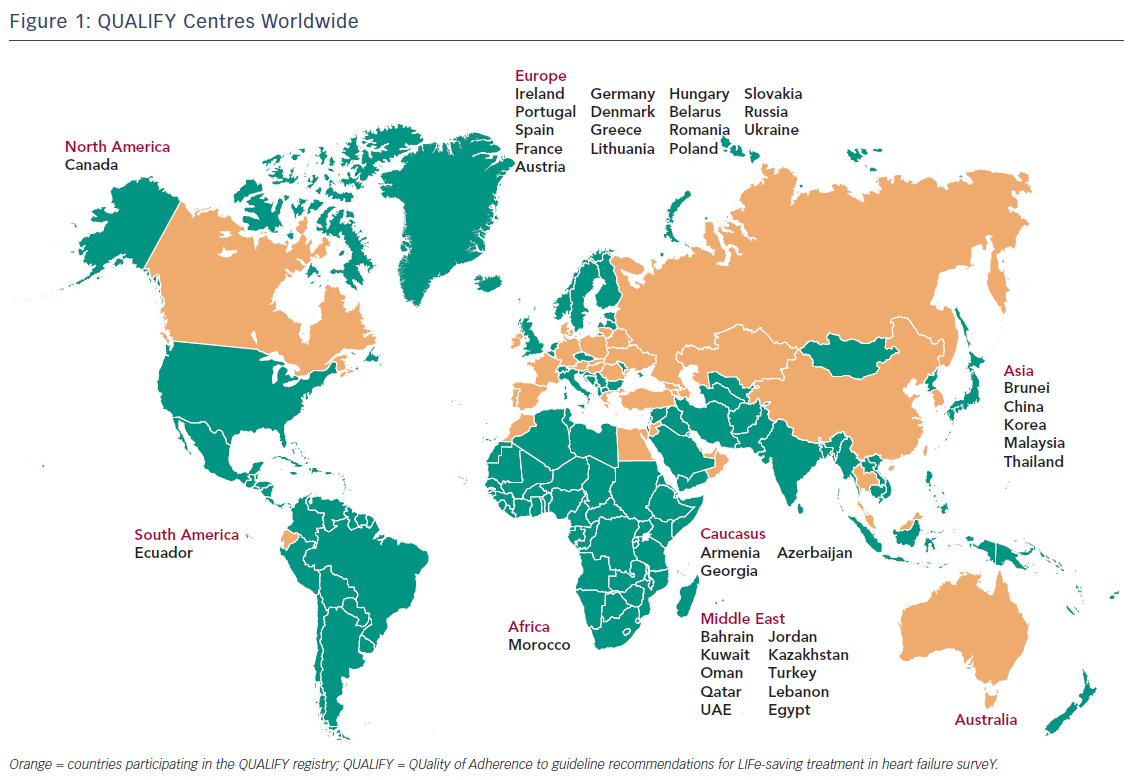 Global Adherence and Effects of Comorbidities

Good physicians’ adherence score for key HF medicines, with prescription of ≥50 % of recommended dosages, was associated with better clinical outcomes at 6-month follow-up than moderate or poor adherence score (Figure 3).12

The QUALIFY 6-month data provide strong support for physicians’ adherence to guideline-recommended doses of key pharmacological therapies for HF. The global nature of the study suggests that these findings are relevant to clinicians working in very different healthcare settings.

The current data underline the importance of using HF medication in recommended doses. In an earlier QUALIFY paper, we reported good overall adherence to ACEI/ARB, BB, MRA and ivabradine treatment of 67 %,10 and this was in line with data from the British National Heart Failure Audit.3 However, as shown in the current analysis, good adherence was achieved in fewer than one-quarter of patients when drug dosages were taken into account. Few other studies have included dosages in adherence calculations, but the recent BIOSTAT-CHF study in 11 European countries also showed that a minority of patients reached target doses recommended by the ESC guidelines.14 In BIOSTAT-CHF, patients receiving >50 % of recommended doses of ACEIs and BBs had better outcomes than those taking lower doses.14 Similarly, in the Austrian Heart Failure Registry, improved guideline adherence related to dose escalation towards optimal levels was associated with reduced long-term mortality in ambulatory HFrEF patients surviving 1 year after registration.15 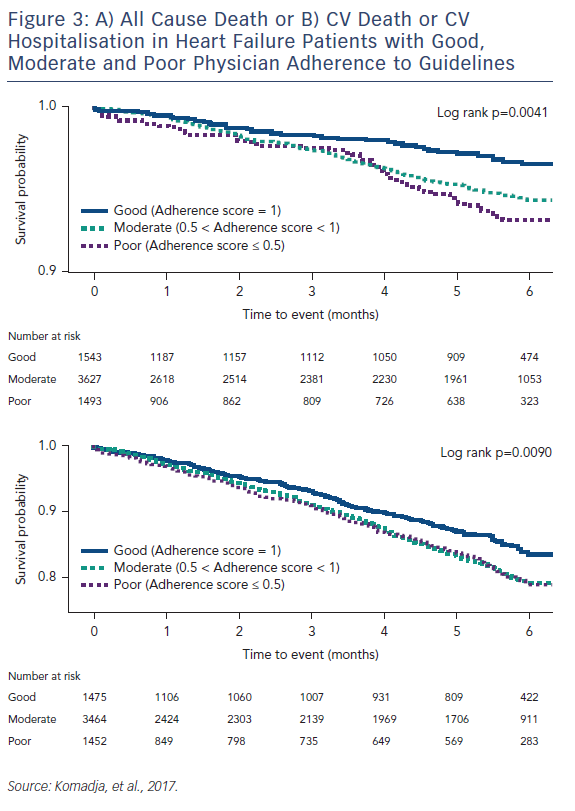 Impact of Patient Frailty and Comorbidities

The current QUALIFY data demonstrate the impact of patient frailty and HF severity on prescribing decisions as well as the complexity of guideline adherence. Poor adherence was more common in older patients and in those with severe HF (New York Heart Association Class IV) or cancer, suggesting that patient frailty may have played a role.

Perhaps surprisingly, more patients had comorbidities in the good adherence group than in the moderate and poor adherence groups. It might have been expected that, with more medicines to prescribe, physicians’ adherence would suffer, but results of other studies have shown conflicting results, with comorbidities having both negative and positive effects on adherence.16–18 It is possible that in more complex patients, more care is taken to ensure that drug therapies are optimised.

Need for Communication and Education

Physicians’ awareness of guideline recommendations is fundamental for successful implementation, and communication campaigns improve the rate of prescription of recommended medications.19 In QUALIFY, a large majority of participants were cardiologists, so it is unclear whether adherence levels in the study reflect those in general practice. Certainly, early experience from the international Optimize Heart Failure Care Program has shown that it is possible to raise HF awareness and optimise HF pharmacological therapy through the use of simple clinician- and patient-focused educational tools.20

Although QUALIFY has highlighted the importance of physicians’ adherence to guideline-recommended HF therapies, access to and affordability of HF treatments will inevitably affect adherence, depending on the economic status of a country. General organisation of healthcare systems and the role of reimbursement schemes, incentives or obligations to comply with guideline recommendations will all play a role in whether patients get the life-saving therapies they need.21,22

To make further progress in reducing mortality and hospitalisation for HF patients, it is essential that physicians prescribe evidencebased therapies according to international guidelines, and QUALIFY has confirmed the importance of adherence to recommended doses of key medicines for improving clinical outcomes. Although hospitalisation is undesirable as it is indicative of worsening HF, it is a good opportunity to update a patient’s medication to comply with guideline recommendations and to take steps to ensure that treatment optimisation is sustained following discharge back into the community. With growing evidence that simple educational initiatives – for clinicians and patients – can help to optimise the use of key HF medicines, there is potential for another great leap forward in reducing the burden of HF for patients, families, clinicians and healthcare providers.