HF has been defined as global pandemic, since it affects around 26 million people worldwide.4 In 2012 it was responsible for an estimated health expenditure of around $31 billion (£22.5 billion), equivalent to more than 10 % of the total health expenditure for cardiovascular diseases in the United States (US).5 Projections are even more alarming, however, with total costs expected to increase by 127 % between 2012 and 2030.5

In this review we describe the epidemiology of HF, providing data about the prevalence, incidence, mortality and morbidity worldwide.

Currently 5.7 million people in the US have HF, but the projections are worrisome since it is expected that by 2030 more than 8 million people will have this condition, accounting for a 46 % increase in prevalence (see Figure 1).5 In Europe, the EPidemiologia da Insuficiencia Cardiaca e Aprendizagem (Epidemiology of Heart Failure and Learning – EPICA) study performed in the late 1990s in Portugal reported HF prevalence of 1.36 % in the 25–49-year-old group, 2.93 % in the 50–59-yearold group, 7.63 % in the 60–69-year-old group, 12.67 % in the 70–79-year-old group, and 16.14 % in patients >80 years.6 Another analysis in Spain showed HF prevalence steadily increasing from 895 per 100,000 population per year in 2000 to 2,126 cases in 2007, with higher rates in men than women. The prevalence of HFpEF was higher than that of HFrEF; in the former rates were higher in women, while in the latter they were higher in men. The overall HF prevalence significantly increased with ageing, particularly among patients >64 years and with HFpEF.7 In Germany in 2006 the prevalence of HF was 1.6 % in women and 1.8 % in men, with numbers increasing considerably with advancing age.8 In Sweden in 2010 the crude prevalence of HF was 1.8 % and was similar in men and women, but after adjustment for demographic composition the estimated rate was 2.2 %, with a weak decrease in temporal trend in women but not men between 2006 and 2010.9 A recent survey reported HF prevalence of 1.44 % in Italy, with rates increasing with the ageing of the population.10 HF is also an important health problem in Asia, and its prevalence seems to be even higher compared to Western countries, ranging between 1.3 % and 6.7 %.11 Currently in China there are 4.2 million people with HF, with an estimated prevalence of 1.3 %.12,13 In Japan around 1 million people have the condition, accounting for 1 % of the population.14–16 In India the estimates range between 1.3 and 4.6 million, which translates to a prevalence of 0.12–0.44 %, although this may be underestimated.17 In Southeast Asia 9 million people have HF; with a prevalence of 6.7 % in Malaysia and 4.5 % in Singapore.4,18 In South America the HF prevalence is 1 % and in Australia it ranges between 1 % and 2 %, similar to Western countries (see Figure 2).19,20 Although aetiologies and clinical characteristics have been studied in Sub-Saharan Africa,21 there are actually no population studies providing insight into prevalence or incidence .22

Few studies have evaluated the different trends in HFrEF and HFpEF prevalence and there are currently no data on the emerging HFmrEF category. Data are heterogeneous and also depend on the definition used for HFpEF and HFrEF, but it might be that about half of HF patients have HFrEF and half HFpEF, with the proportion of individuals with HFpEF increasing, particularly if more unselected populations are considered (see Figure 3).23–26 HFpEF could be dominant in driving the overall HF prevalence, since in the past 20 years secular trends have reported an increasing proportion of patients with HFpEF but relatively stable or even decreasing rates with HFrEF (see Figure 4); thus it is expected that by 2020 65 % of patients hospitalised for HF will have HFpEF.27 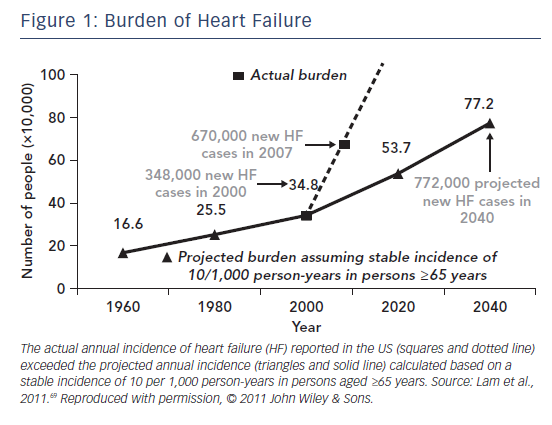 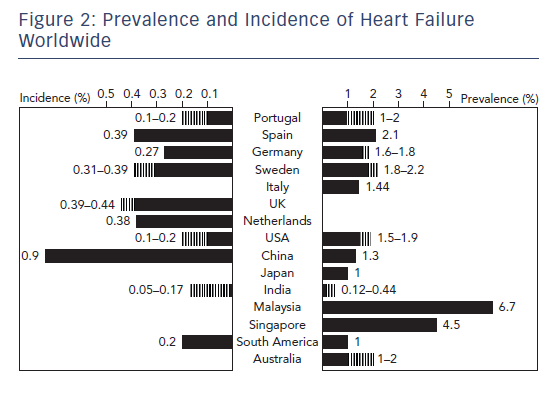 Notably, the increase in HF prevalence observed worldwide may not necessarily be linked with an increase in HF incidence, which has been reported to be stable or even decreasing in several studies, particularly in women.28,29 The ageing of the population, together with improved HF survival due to the advancement in treatments and diagnostic technology could explain the increase in prevalence, whereas the reduction in incidence (due to prevention programmes) may be determined by lower severity and better treatment of acute coronary syndromes.29–32 In addition to this, the risk factors for HFpEF are multifactorial and complex and there is no known prevention other than treatment of the risk factors, such as hypertension, diabetes and obesity; whereas prevention and early treatment strategies (i.e. early revascularisation) appear to be effective in reducing the risk and severity of acute myocardial infarction. These observations may explain a reduction in the incidence of HFrEF but increasing incidence of HFpEF and HFmrEF.

The demographic and clinical characteristics of HF have been widely described in Europe and the US, and have been shown to differ considerably between HFpEF and HFrEF, with further variation according to the populations enrolled and the definitions of HFpEF and HFrEF adopted. In particular, it has emerged that HFpEF patients are more likely to be women and older, obese, with a higher New York Heart Association (NYHA) class and cardiovascular comorbidities (such as hypertension, diabetes, atrial fibrillation, valvular disease) and non-cardiovascular comorbidities (such as a anaemia, chronic kidney disease, chronic pulmonary disease, hypothyroidism, cancer, peptic ulcer and psychiatric disorders); whereas coronary artery disease is the main determinant of HFrEF.23–27,35–38 Recently, HFmrEF has been recognised as a potentially distinct entity and the few observations available suggest that its characteristics are generally intermediate between those of HFpEF and HFrEF: a high prevalence of comorbidities as in HFpEF (i.e. hypertension, diabetes, atrial fibrillation, chronic pulmonary and kidney disease); and a high prevalence of coronary artery disease as in HFrEF, particularly in males and older patients.36,39,40

Most studies describing HF characteristics have been performed in North America and Europe; however the phenotypes of HF patients could be different in other regions due to different aetiologies, comorbidities, economic and health care systems. One study showed that in Africa HF patients are younger than in other regions, with most being NYHA class III/IV and having valve disease.41 Half of these HF patients are male and 29 % have HFpEF. The leading causes of HF in Africa are hypertensive heart disease and dilated cardiomyopathy.41–43 In Asia the proportion of patients in NYHA class III/IV is similar to that in NYHA class II.17,41,44 Coronary artery disease is the leading HF aetiology. More than the half of the HF population is male and has hypertension, and HFpEF is present in 41 % of patients.17,41,44 It is notable that in Japan ischaemic aetiology is still lower than in Western countries. It has, however, increased over time, and the HFpEF prevalence ranges between 34 % and 68 %.16 Middle Eastern HF patients are also young, and are more likely to be male. There is a high prevalence of several comorbidities as such obesity, diabetes, hypertension, hyperlipidaemia and valve disease, but only 10–30 % of the population has HFpEF. Coronary artery disease is the main cause of HF in the Middle East.41,45 In South America the most common cause of HF is coronary artery disease. More than half of HF patients are male and have hypertension, and around half have dyslipidaemia and valve disease.41,46,47 In Australia HF patients are more likely to be male and the leading HF aetiology is coronary artery disease; HFpEF is present in 25 % of cases.48

HF outcomes have been extensively investigated in the US. The Organized Program to Initiate Lifesaving Treatment in Hospitalized Patients With Heart Failure (OPTIMIZE-HF) study enrolling 20,118 patients with HFrEF and 21,149 with HFpEF (EF ≥40 %) reported no differences between HFrEF and HFpEF in 60–90-day mortality (9.8 % versus 9.5 %) and rehospitalisation (29.9 % versus 29.2 %), but higher in-hospital mortality in those with HFrEF (3.9 %) versus HFpEF (2.9 %). When the comparison between HFpEF (EF >50 %) and HFmrEF (EF 40–50 %) was performed, no differences in outcomes were observed.36 Similarly, the Get With The Guidelines (GWTG) registry that enrolled 15,716 patients with HFrEF, 5,626 with HFmrEF and 18,897 with HFpEF observed 37.5 %, 35.1 % and 35.6 % mortality at 1 yearm respectively, with no differences in risk after several adjustments. The 1-year HF hospital readmission rates were 30.9 %, 28.4 % and 24.3 % in HFrEF, HFmrEF and HFpEF, respectively, but there was a higher risk in HFrEF and HFmrEF compared with HFpEF.49 The Management Predischarge Process for Assessment of Carvedilol Therapy for Heart Failure (IMPACT-HF) study reported that >50 % of patients were discharged with unresolved symptoms, and within 60 days half had worsening symptoms, a quarter were re-hospitalised and >10 % died.50 The Canadian Enhanced Feedback for Effective Cardiac Treatment (EFFECT) study enrolling 1,570 patients with HFrEF and 880 with HFpEF reported no differences in mortality at 30 days (7.1 % and 5.3 %, respectively) and 1 year (25.5 % and 22.2 %, respectively). Similarly, for HFrEF and HFpEF there were no differences between HF readmissions at 30 days (4.9 % and 4.5 %, respectively) and at 1-year (16.1 % and 13.5 %, respectively).51

In Europe, the EuroHeart Failure Survey compared prognosis in 3,148 patients with HFpEF and 3,658 with HFrEF, reporting higher 90-day mortality in those with HFrEF (12 %) compared with HFpEF (10 %), but similar readmission rates (21 % versus 22 %, respectively).23 In the EuroHeart Failure Survey II, which enrolled 3,580 patients hospitalised for HF, overall in-hospital mortality was 6.4 %.52,53 Recently, in the European Society of Cardiology Heart Failure Long-Term (ESC-HF-LT) registry that enrolled 12,440 patients with acute and chronic HF from 21 European and/or Mediterranean countries, the 1-year mortality rate was estimated to be 23.6 % for acute HF and 6.4 for chronic HF; whereas the rates for the combined endpoint of mortality or HF hospitalisation within 1 year were 36 % for acute HF and 14.5 % for chronic HF. Mortality rates ranged across the different regions from 21.6 % to 36.5 % for acute HF and from 6.9 % to 15.6 % for chronic HF.54 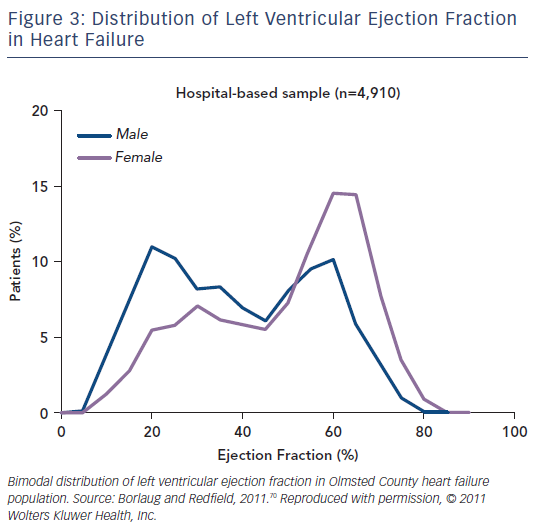 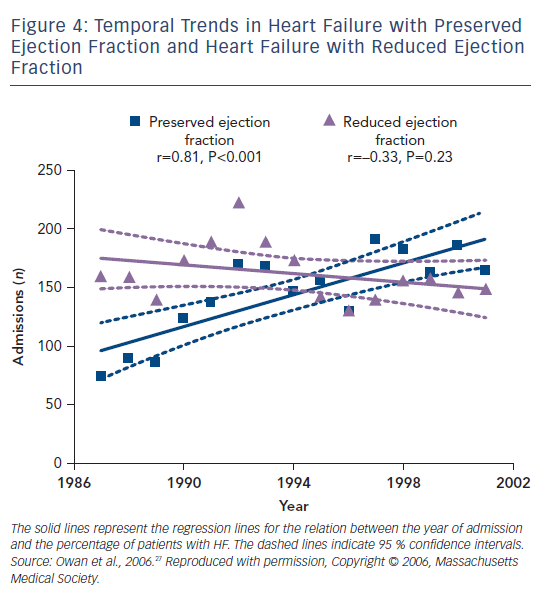 Since many episodes of worsening of HF are treated by modifying oral therapy or by temporary intravenous treatments in community departments without hospital admission, ambulatory care has a role in HF management. The Prospective Comparison of ARNI With ACEI to Determine Impact on Global Mortality and Morbidity in Heart Failure (PARADIGM-HF) trial recently showed that episodes of outpatient treatment-intensification could significantly contribute to accrue a target number of endpoints in an event-driven trial.63 According the most recent US reports, in 2011 there were 553,000 emergency department visits and 257,000 outpatient department visits for HF; whereas in 2012 there were 1,774,000 physician office visits with a primary diagnosis of HF.5 No similar estimates are available in Europe, but the quality of outpatient care has been evaluated by the ESC-HF-LT registry, which reported only 3.2–5.4 % non-adherence to guidelinesuggested drugs, although enrolment in this registry was highly selective.64 A report from the nationwide and generalisable Swedish Heart Failure Registry suggests poor treatment utilisation, particularly of mineralocorticoid receptor antagonists and device therapy.65

Quality of life in HF is worse than in many other chronic diseases.66 Indeed, a national registry in Sweden has reported that 66,318 and 59,535 premature life-years are lost due to HF compared to 55,364 and 64,533 due to cancer in men and women, respectively.67 In the Candesartan in Heart Failure: Assessment of Reduction in Mortality and Morbidity (CHARM) trial, health-related quality of life was similarly impaired in patients with HFpEF and HFrEF (41.1 versus 40.8) and independent factors were associated with worse health-related quality of life in both populations (female gender, younger age, higher body mass index, lower systolic blood pressure, greater symptom burden and worse functional status).68

The current review reports data from studies with different designs and settings, thus the prevalence, incidence and outcome rates might not be fully comparable.

Dataindicate that HF is a major and growing public health problem worldwide. Even though the incidence of HF is stable, the prevalence is going to rise because of the ageing population and improvements in treatment. This will cause further increases in hospitalisation rates and, consequently, in health care costs. HF is a common disease not only in Europe and the US, but worldwide. The switch toward a Western lifestyle in developing countries may be contributing to a real HF pandemic. Phenotyping of HFpEF and HFmrEF, testing existing drugs and developing novel interventions for these categories represents an important future challenge. Currently HFpEF and HFmrEF are poorly investigated, particularly in developing countries, and there are no effective therapies. In order to reduce the number of hospitalisations and related costs, appropriate treatments are needed and further epidemiological studies are required to better characterise the HF population and improve trial design.