Cognitive decline is a prevalent condition and independent prognostic marker of unfavourable outcomes in patients with heart failure. The highest prevalence, up to 80 %, is reported in patients hospitalised due to acute decompensation. Numerous factors contribute to cognitive dysfunction in heart failure patients, with hypertension, atrial fibrillation, stroke and impaired haemodynamics being the most relevant. Cerebral hypoperfusion, disruption of blood–brain barrier, oxidative damage and brain-derived cytokines are pathogenic links between heart failure and alteration of cognitive functioning. White matter hyperintensities, lacunar infarcts and generalised volume loss are common features revealed by neuroimaging. Typically affected cognitive domains are presented. Assessment of cognitive functioning, even by simple screening tests, should be part of routine clinical examination of heart failure patients.

To ensure performance of everyday tasks, adherence to treatment regiments, appointments, and following dietary requirements, cognition is crucial.1 Cognitive impairment (CI) is a broad and inclusive term used to describe dysfunction of processes in various cognitive domains, such as attention, memory, judgment, reasoning, decision-making and problem solving, comprehension and production of language.

Evidence is mounting that impaired cardiac function may precipitate early-onset CI. Reported prevalence2–8 of cognitive dysfunction in the heart failure (HF) population parallels the severity of HF, being the highest in the acute decompensation settings (see Table 1).

Multiple factors contributing to cognitive decline in HF are presented in Figure 1. Hypertension is found to be independently associated with CI9,10 through compromise in auto-regulation of cerebral blood flow and cerebral ischaemia (see Figure 2). Neuroimaging has revealed structural brain abnormalities (see Figure 3) correlating with reduced cognition.

Cognitive impairment has been identified as an important clinical issue in numerous recently conducted studies, though no definite consensus has been achieved so far regarding optimal diagnostics and treatment tools in patients suffering both from HF and CI. There is a definite limitation on this issue in the literature as investigators have used plenty of different tools ranging from simple and fast tests to neuropsychological test batteries, and the assessment of cognition has not been standardised. The common approach should be thoroughly investigated and reached using existing data and future clinical studies.

The severity of CI may range from mild symptoms to advanced dementia. Mild CI is a commonly used definition for a clinical syndrome in which a patient has subjective complaints as well as objective symptoms of cognitive decline (measured by neuropsychological tests), though daily functioning of the patient is mostly intact.11 It is established that patients with mild cognitive impairment have an increased risk of progression to dementia.12,13 Dementia is characterised by a progressive impairment in more than one cognitive domain, and compromised daily functioning is evident.

Most of the HF patients suffer from mild impairment in cognition, but some of them may have moderate-to-severe CI.13 Heart failure adversely affects various cognitive domains, including attention, learning ability and working memory, executive functions, and information processing speed (see Figure 4).13–15 Cognitive impairment in HF patients usually fulfils the criteria of vascular CI or vascular dementia.16

Being one of the most important cognitive functions, episodic memory of specific personal events and experiences was demonstrated to slowly decline in HF patients.5,13,14,17 Furthermore, deficits in initial learning as well as delayed information recall were reported in the literature.17 This suggests that CI in HF patients and CI in patients with vascular dementia could share pathophysiological mechanisms.18 Deficits in executive functioning (problem solving, planning, reasoning and flexibility) have a strong impact on the patient’s everyday life and are common in cases of frontotemporal and vascular dementia, and are also detected in HF patients.19 Importantly, depression should be considered during the evaluation of patients with HF as a common treatable disorder in elderly persons having chronic diseases. Depression markedly compromises cognitive functioning and treatment adherence in HF patients.9,19

A number of neuropsychological tests for measurement of cognitive functioning are available, yet some of them are time-consuming and require special training. There is a need for tests that are informative, yet short and easy to administer in everyday clinical practice. Currently, there is no consensus regarding the optimal battery of neuropsychological tests to assess patients with HF. Brief screening instruments to administer in an outpatient clinical practice, the Mini-Mental State Examination (MMSE) or the Montreal Cognitive Assessment (MoCA), are the most widely used screening tests in the literature. Some studies reported an association between the left ventricular ejection fraction and the MMSE scores.2 Both tools are 30-point tests to assess basic cognitive domains, the presence of and severity of CI. Cut-off scores of ≤24 are usually used to diagnose mild CI.20 Though the MMSE and the MoCA are useful tests for screening patients with CI, they could be insufficient in identifying subtle cognitive dysfunction, and more detailed neuropsychological tools may be required.21

Importance of Cognitive Decline for Prognosis and Self-care

Several prospective and cross-sectional studies showed a strong independent association of cognitive deterioration and increase in mortality and readmissions in acute heart failure (AHF) patients.2,6,8,10,22,23 A twofold increase in 30-day death and readmissions,8 almost fivefold rates of 1-year mortality,23 as well as increase in hospitalisation and/or death within 5 years were demonstrated.22 Such association with poor outcomes is observed even in cases of mild CI,8 which frequently remains undiagnosed. Dodson et al. found that patients with unrecognised cognitive decline exhibited a higher 6-month mortality and hospital readmissions.6

Evidence of therapeutic methods for prevention and management of cognitive decline in HF is lacking. The primary approach to the management of the HF patients with CI seems to be optimal pharmacotherapy, outlined in the HF guidelines,26 restoring central haemodynamics, as well as correction of vascular risks factors. Several studies demonstrated that patients with mild CI can return to normal cognitive functioning.27 The beneficial influence of HF treatment on cognition processes including angiotensin-converting enzyme inhibitors, diuretics, digoxin, cardiac resynchronisation therapy and heart transplantation were reported. 28–31 Clinical trials (such as the Efficacy and Safety of LCZ696 Compared to Valsartan on Cognitive Function in Patients with Heart Failure and Preserved Ejection Fraction [PERSPECTIVE] trial; NCT02884206) investigating the impact of treatment with angiotensin receptor neprilysin inhibitors and computerised adaptive cognitive training on cognitive function are ongoing.32 Non-pharmacological measures, such as physical activity, are also important and have been identified to have beneficial effects on cognition as well as protective benefits on brain plasticity in vascular CI and related conditions.33,34 The main task for physicians is to identify patients with early stages of CI in order to start corrective measures as soon as possible and also manage patients at risk of CI.35 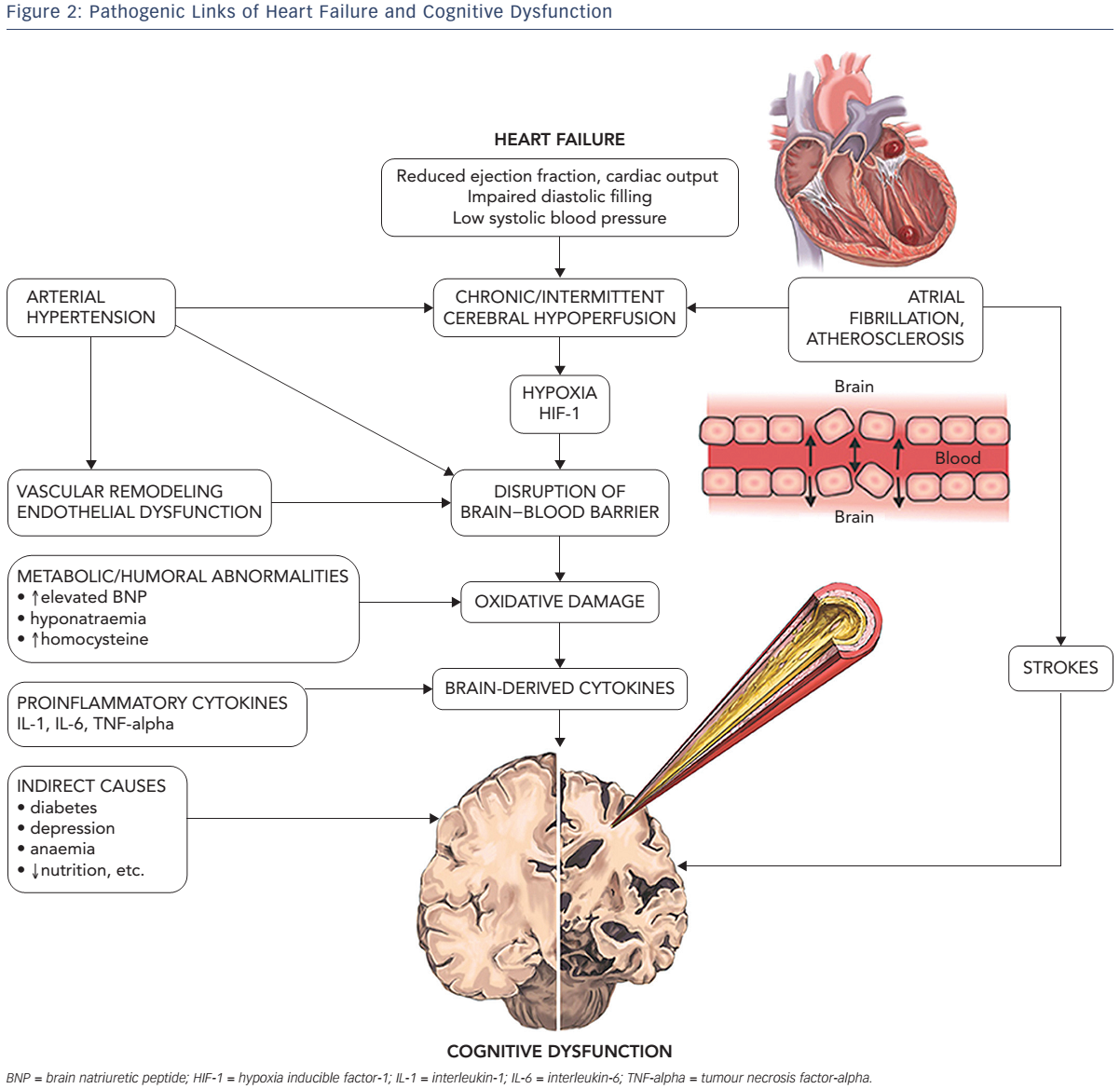 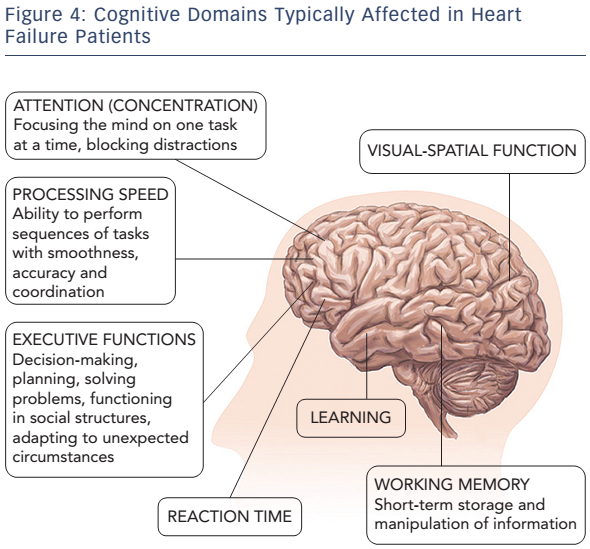 There are no particular approved medicines for patients with CI in HF. Given that acetylcholinesterase inhibitors and memantine were found to be effective in vascular dementia, a similar effect might be expected in patients with HF, though no formal regulatory approvals have been received.36,37

Cognitive decline is a prevalent condition and an independent prognostic marker of adverse outcomes in patients with HF. Assessment of cognitive functioning, even by simple screening tests, should be part of routine clinical examinations of HF patients. Despite evolving data in clinical practice, CI is still the challenge for clinicians. Future research including cognitive function as a relevant endpoint of HF studies is warranted. Better understanding of pathogenic links between CI and HF including molecular, neuroendocrine, epigenetic and psychosocial factors is needed. It is important to uncover the relationship between cognitive function and HF types and co-morbidities, use of cardiovascular drugs and devices. Furthermore, more randomised and controlled trials should be initiated to provide additional data and implement diagnostic, prevention and management tools for CI in patients with HF.