Physicians working in Europe and the United States should suspect Chagas heart failure in every patient coming from Latin America with chronic heart failure. Diagnosis should be confirmed by positive serology. Right bundle branch block and left anterior fascicular block on 12-lead electrocardiogram, enlarged cardiac silhouette with no pulmonary congestion on chest X-ray and left ventricular apical aneurysm on echocardiography are the distinctive features of this condition. The clinical course is poorer than that of non-Chagas heart failure; however, medical treatment is similar. Implantable cardioverter-defibrillators are useful in the primary and secondary prevention of sudden cardiac death. Cardiac resynchronisation therapy can be given to patients on optimal medical therapy and with lengthened QRS complex. Heart transplantation is the treatment of choice for patients with end-stage Chagas heart failure.

More than a century after its discovery, Chagas disease still is a major health problem in Latin America, with 5.7 million people in 21 countries being affected by it.1 Moreover, about 70 million people are at risk of acquiring the illness.1 Cases of Chagas disease are now found globally; there are more than 400,000 immigrants with this disease living in Europe (mainly in Spain, Italy and France) and the United States.2 The consequence of this is that the annual global (direct plus indirect) cost of the disease is in the region of US $7.2 billion, which is more than the cost of the majority of cancers.3

Given the epidemiology of Chagas disease, clinicians faced with immigrants from Latin America should have a high degree of suspicion for heart failure in those with positive serology. Figure 1 provides a simplified care pathway. An echocardiographic study should be undertaken to detect early myocardial dysfunction in this patient population.

In patients with mild symptoms, especially in those in New York Heart Association (NYHA) Class II, precordial chest may simulate coronary artery disease (CAD).4 Coronary angiography can be performed to rule out concomitant obstructive CAD, but this is normal in the vast majority of cases.14 Abnormalities in myocardial perfusion scintigraphy can be observed in the absence of concomitant obstructive CAD in Chagas heart failure patients, thus suggesting derangement of the coronary microvasculature.

Physical examination usually reveals a high frequency of splitting of the second heart sound, as first noted by Chagas.15 This is associated with the presence of right bundle branch block (RBBB) on 12-lead electrocardiogram (ECG). Isolated liver enlargement heralding the appearance of right-sided heart failure can also be detected on physical examination.16

Another finding not observed at the same magnitude in non-Chagas disease heart failure is the presence of cardiac arrhythmias on physical examination.17 Atrial fibrillation is observed in up to 30 % of patients with this condition18,19 and premature contractions (ventricular in origin in the vast majority of cases) occur in about 50 % of patients.18 It is important to emphasise that the prevalence of atrial fibrillation is higher in patients with Chagas heart failure than in those from a general, unselected population;20 about three-quarters of patients with Chagas heart failure will have cardiac arrhythmia on physical examination.

On chest X-ray it is common to see an impressive cardiomegaly with no evidence of congestion, a finding observed as far back as 1945.13 This is probably a consequence of the concomitant right ventricular involvement usually observed in patients with Chagas heart failure. Such a characteristic should prompt physicians to consider this diagnosis in patients from an area where Chagas is endemic. 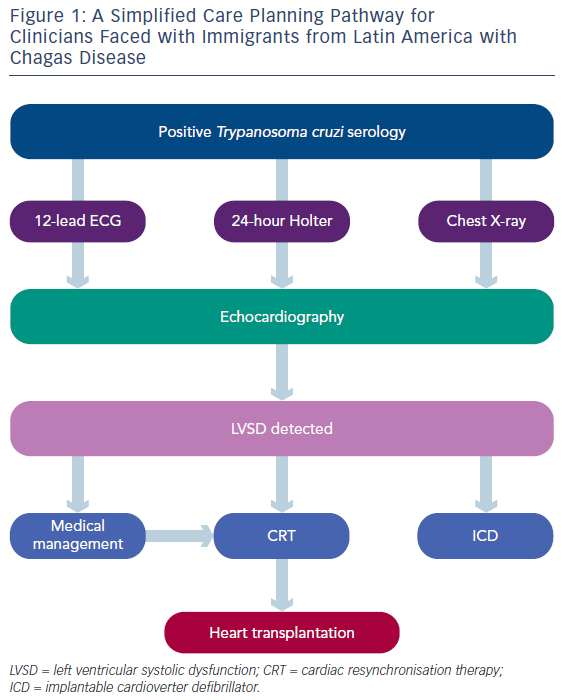 Twelve-lead ECG and Holter monitoring can detect complete atrioventricular block. Chagas disease is the leading cause of complete atrioventricular block in areas where the disease is endemic;31 it was found in about 10 % of patients seen in one referral centre for the treatment of Chagas disease.32 In other referral centres specialised in heart failure treatment, however, the frequency of pacemakers in patients with Chagas heart failure is as high as 50 %.33 The presence of CHF and advanced atrioventricular block in young patients from an endemic area should therefore alert the physician to a diagnosis of Chagas cardiomyopathy.

Thromboembolism is a constant threat for patients with Chagas heart failure, particularly pulmonary embolism. It has a considerable impact on the clinical course of the disease. In severe CHF, right-sided cardiac thrombosis is found in about 58 % of patients, and half will experience pulmonary thromboembolism.35 Cerebrovascular accidents are also a clinical problem, affecting about 11 % of patients.36 In those with milder forms of the syndrome, the risk of death from cerebrovascular accidents is high, at about 42 %.26 Patients with Chagas heart failure are at risk of thromboembolic phenomena due to the high prevalence of mural thrombosis, therefore physicians should routinely screen such patients for intracavitary thrombus and provide timely anticoagulation.

There is no evidence base supporting the treatment of patients with Chagas heart failure; Chagas disease is one of the most important but neglected diseases in the world. Treatment of this condition therefore mainly relies on the experience of physicians dealing with this syndrome.

Diuretics, particularly furosemide, have successfully been used to decongest systemic and/or pulmonary circulation, and no deleterious effect has been observed.9 When furosemide alone is unable to relieve symptoms at a mean daily dosage of 160 mg/day, hydrochlorothiazide can be added.9 In cases of hyponatremia, water restriction has proven useful. A combination of spironolactone plus enalapril has also shown to be of benefit in patients with Chagas heart failure.37

Beta-blockers have been found to have a beneficial effect. Carvedilol 50 mg/day increased LVEF when it was <45 %.37 Metoprolol 50 mg/day induced improvement in clinical status, decreased noradrenaline serum levels, and increased systemic arterial pressure and LVEF on echocardiography.39 A sub-analysis of a prospective randomised trial performed on 25 patients showed increased survival in patients with Chagas heart failure.40 A longitudinal cohort study has demonstrated that metoprolol or carvedilol, even in small daily doses (carvedilol >9.75 mg), are associated with improved survival.41 Finally, the use of beta-blockers may have been responsible for the decrease in mortality observed in patients with Chagas heart failure in recent years.42 When the combination of ACEIs and beta-blockers provokes symptomatic systemic arterial hypotension, and the target dose of each agent cannot be reached, it has been suggested that the ACEI should be decreased and the target dose of beta-blocker be given.9

Digoxin produces a decrease in renin–angiotensin system activity43 and an improvement in haemodynamic profile44 when administered acutely to patients with Chagas heart failure. Nonetheless, the chronic use of digoxin is an independent predictor of mortality in such patients,34 probably due to digoxin intoxication. Increased digoxin levels have been detected in about 55 % of patients with Chagas heart failure;45 therefore serum levels should be measured when digoxin is given to patients with this condition.

Aetiological treatment with benznidazole has no effect in patients with mild Chagas heart failure. In the BENznidazole Evaluation For Interrupting Trypanosomiasis (BENEFIT) trial, which included about 2,854 Chagas disease patients – 17 % of whom had left ventricular systolic dysfunction – benznidazole showed no benefit over placebo in terms of morbidity and mortality. Aetiological treatment should not therefore be given to patients with Chagas heart failure.47

The efficacy of cardiac resynchronisation therapy (CRT) in the setting of Chagas heart failure is not completely clear in view of the paucity of studies. Silva et al. studied the effects of CRT in patients receiving right ventricular pacing and observed an increase in LVEF and an improvement in functional status.57 Araujo et al.58 reported an increase in LVEF and a decrease in left ventricular systolic volume. The European Society of Cardiology guidelines have recently recommended CRT for non-Chagas heart failure patients with a QRS duration >150 msec and a non-LBBB. These guidelines also recommend patients with non-LBBB and a QRS duration between 130 and 149 msec be considered for CRT.46 Taking into account that about 16 % of patients with Chagas heart failure will have LBBB, almost half of them will have non-LBBB17,18,21 and the beneficial effects obtained with CRT in such patients make it reasonable to suggest CRT for selected patients with this condition.

The prognosis for Chagas disease patients on the heart transplant waiting list is worse than that of non-Chagas disease patients.59 Heart transplantation (HT) is the treatment of choice for patients with this condition. Patients with an annual mortality higher than around 70 % should be considered for HT. Such patients are those with persistent NYHA Class IV, LVEF <30 %, on inotropic support, that have a maximal oxygen consumption rate <10 ml/kg/min, electric storm, hyponatremia along with LVEF <31 %, are not taking beta-blockers and those using digoxin.60

Aetiological treatment for HT candidates with Chagas disease is not usually recommended because it is ineffective in precluding the reactivation of acute Chagas disease in the HT recipient.61,62 In the case of inadvertent HT from an infected to an uninfected patient, however, the case is different. Blood and tissues should be closely monitored for signs of the parasite for at least for 2 years post transplant and, if found, aetiological treatment should be started as soon as possible.63

Morbidity in the perioperative period is similar to that found in non- Chagas disease centres in Brazil. Mortality in Brazil varies from 9 to 22 % because of the widespread unavailability of mechanical circulatory support;60 however a study of 11 patients in the United States showed a 6-month mortality of 18 %, consistent with results from South America, which is not significantly different.64

T. cruzi infection reactivation prevalence varies from 27 to 90 %, with a mean prevalence of around 35 %, and can be confounded with rejection in about 43 % of cases. Reactivation can be found from 1 to the 24 months post-HT.65 Mycophenolate mofetil appears to be a risk factor for T. cruzi reactivation.61,66 Reactivation is treated with benznidazole or nifurtimox, and mortality is very low (0.7 %),62 even in cases with central nervous system involvement.67 Clearly, HT is a formal indication for the treatment of end-stage Chagas heart failure.

A randomised trial of intracoronary injection of autologous bone marrow-derived mononuclear cells versus placebo in patients with severe Chagas heart failure has shown no benefit in comparison to placebo.68 This therapy should therefore not be given to patients with this condition.