Cardiac transplantation is the gold standard treatment for patients with advanced congestive heart failure that is refractory to maximal medical therapy. However, donor heart availability remains the major limiting factor, resulting in a large number of patients waiting long periods of time before transplantation. As a result, mechanical circulatory support devices have been increasingly used as a ‘bridge’ in order to sustain organ function and stabilise haemodynamics while patients remain on the transplant waiting list or undergo left ventricular assist device surgery. Intra aortic balloon pumps (IABP) are commonly used for temporary circulatory support in patients with advanced heart failure. IABP is traditionally placed percutaneously through the transfemoral artery approach. The major limitation with this approach is ambulatory restriction that can promote deconditioning, particularly in situations of prolonged circulatory support. A subclavian/axillary artery approach IABP insertion allows patients to be ambulatory during the pre-transplant period. In this review, we aim to summarise the physiology of IABP, the evidence for its use in advanced CHF and the efficacy and safety of subclavian artery IABP insertion.

Heart failure is a progressive and fatal disease that affects more than 23 million people worldwide, and will affect more than 8 million people in the USA by 2030.1,2 Despite major advancements in medical and device treatments for heart failure in recent decades, the incidence of heart failure continues to rise. This epidemic has a major impact on patient quality of life, while imposing heavy costs on the healthcare system. According to the American College of Cardiology/American Heart Association, advanced congestive heart failure (CHF) is referred to as stage D when patients continue to have symptoms at rest despite optimal guideline directed medical therapy.3 In the USA, more the 250,000 patients suffer from advanced CHF refractory to maximal medical therapy.4 The most recent guidelines update reiterate that cardiac transplantation remains the gold standard therapy for patients with stage D heart failure.5 However, donor heart availability remains the major limiting factor, resulting in a large number of patients waiting long periods of time before transplantation.6 As a result, mechanical circulatory support (MCS) devices have been increasingly used in the acute setting as a ‘bridge’ in order to sustain organ function and stabilise haemodynamics while patients remain on the transplant waiting list or undergo left ventricular assist device (LVAD) surgery. These MCS devices include intra aortic balloon pumps (IABPs), Impella® (ABIOMED) micro-axial flow catheters, and TandemHeart® (Cardiac Assist) centrifugal flow pumps. IABPs are commonly used for temporary circulatory support in patients with advanced heart failure.7–9 IABP is traditionally placed percutaneously through the transfemoral artery approach. The major limitation with this approach is ambulatory restriction that can promote deconditioning, particularly in situations of prolonged circulatory support. This restriction is frequently seen in advanced CHF patients waiting long periods of time prior to cardiac transplantation. A subclavian artery approach IABP insertion is an alternative to femoral artery IABP, which allows patients to be ambulatory during the pre-transplant period. In this review, we aim to summarise the physiology of IABP, the evidence for its use in advanced CHF, and the efficacy and safety of subclavian artery IABP insertion.

An IABP is usually placed in a retrograde fashion through the femoral artery and is positioned distal to the left subclavian artery in the descending thoracic aorta. Inflating and deflating the balloon in synchrony with the heart rate helps augment diastolic blood pressure and theoretically can increase coronary arterial perfusion, thereby augmenting myocardial oxygen delivery.10 During systole, the balloon quickly deflates thereby reducing afterload and therefore decreasing myocardial oxygen consumption and workload.11 Volume shifting of approximately 40 ml per heart beat by the IABP increases left ventricular stroke volume and cardiac output by up to 1 litre per minute, with the largest increases seen in patients with severely reduced cardiac output.12 Patients who continue to have evidence of end-organ dysfunction, haemodynamic compromise or right ventricular overload despite IABP therapy usually require MCS with higher cardiac output, such as the Impella device. 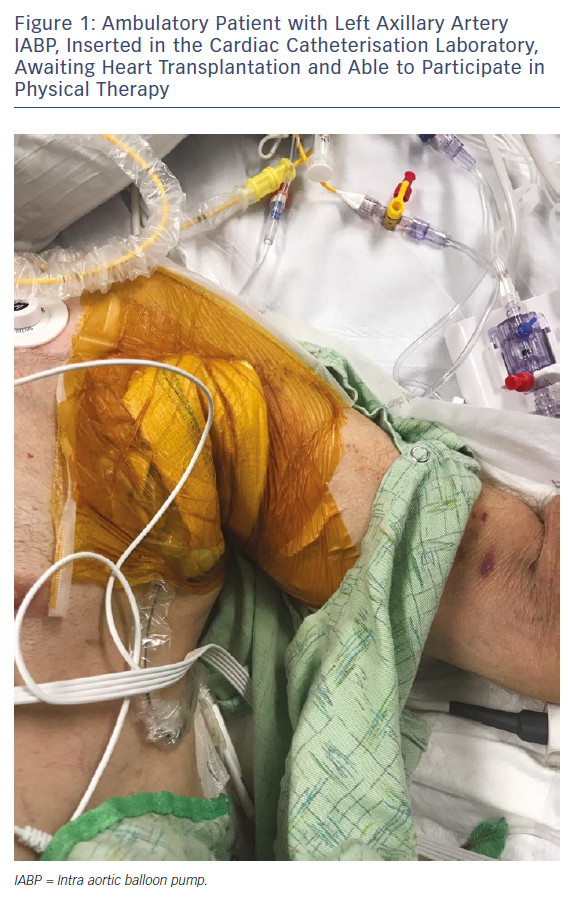 Recent clinical trials have failed to show a clear benefit of IABP support among patients with acute myocardial infarction, cardiogenic shock or high-risk percutaneous coronary intervention.13–15 However, despite these findings, IABP remains the most widely used MCS with more than 50,000 implants per year in the US alone.16 IABP support has been shown to be safe and effective in patients with acute decompensated dilated cardiomyopathy as an urgent method of cardiac support to maintain adequate organ perfusion until cardiac transplant or destination LVAD.17 Current guidelines assign a Class IIa recommendation for the use of MCS in carefully selected patients with stage D CHF as a ‘bridge to recovery’ or ‘bridge to decision’.3 Currently, with the widespread availability of LVAD, approximately 50 % of patients are supported with such devices at the time of cardiac transplantation.18 Continuous-flow LVAD has been shown to improve survival, functional capacity and quality of life in most patients.19,20 However, LVADs have been shown to have similar perioperative mortality, length of hospital stay, renal failure requiring dialysis or early acute rejection compared to IABPs in patients undergoing heart transplant.21 At the time of listing for transplant, patients who underwent IABP support (compared to LVAD) had significantly higher serum creatinine, lower BMI, lower proportion of blood type O and more functional impairment requiring full assistance with activities of daily living.21 This study suggests that patients who have IABP support are generally more unwell and less mobile, which is likely to further exacerbate patient deconditioning. Long-term IABP support has been shown to be effective as a bridge to LVAD implantation in critically ill end-stage CHF patients and was not associated with increased haemorrhagic complications.7 Patients with mild cardiogenic shock can be adequately supported long-term with IABP until LVAD or heart transplant surgery; however, those with severe cardiogenic shock usually cannot maintain adequate organ perfusion with IABP support. These patients with severely reduced cardiac indices usually require MCS with higher flow rates, such as the Impella axial flow pump.

A technique of transthoracic IABP insertion has been previously described, predominantly with the use of a short conduit (usually dacron) to allow placement of the IABP in the ascending aorta, axillary or subclavian artery.2 This insertion method was first described by Mayer in patients with aortoiliac occlusive disease.23 More recently, this technique has been further refined, allowing patients to have an IABP placed percutaneously via the upper extremity in the cardiac catheterisation laboratory by either interventional cardiologists or cardiac surgeons (Figure 1). The trans-brachial artery insertion method has been shown to be safe and effective in unstable CAD patients prior to urgent coronary artery bypass surgery.24,25 Multiple studies have shown the effectiveness of ambulatory IABP in advanced heart failure patients waiting for advanced heart failure therapies, namely LVAD implantation or heart transplantation.26–30 Estep et al. studied 50 patients with end-stage CHF undergoing left axillary-subclavian artery IABP support as a bridge to heart transplantation.26 Of these 50 patients, the majority (84 %) underwent successful heart transplantation with an excellent (90 %) 90-day post-transplant survival. The most commonly encountered minor adverse event was IABP malposition, occurring in 44 % of patients, which was easily rectified with fluoroscopic adjustment.26 All of these patients were allowed to sit upright and 16 patients were able to ambulate to receive dedicated physical therapist-assisted ambulation sessions to prevent deconditioning. The remaining 34 patients had nursing-guided ambulation. This study showed significant improvements in both renal and liver function and decreases in pulmonary hypertension before and after IABP insertion.26 The median time of ambulatory IABP support was 15 days in patients who underwent heart transplantation alone, with maximum support duration of 152 days in one patient who underwent dual heart-lung transplantation.26 Another similar study by Tanaka et al. showed a 93 % success rate with subclavian artery IABP as a bridge to transplant, with no mortality related to the balloon pump.30 These two studies clearly highlight the safety and efficacy of long-term use of ambulatory IABP in the advanced CHF population as a bridge to transplant or LVAD.

A large study of almost 17,000 patients found that major complications associated with IABP insertion is low at 2.6 %.31 These major complications included severe bleeding, major acute limb ischaemia, balloon leak, IABP failure, and death. Limb ischaemia generally occurs secondary to a low femoral artery stick (usually in the profunda or superficial femoral artery) resulting in complete arterial occlusion due to the small calibre of the branches of the common femoral artery. If this occurs, the IABP needs to be removed and placed in the contralateral limb. Arterial dissection or visceral ischaemia (renal or spinal cord) has also been reported.32,33 Despite these complications, the incidence of femoral IABP-related mortality is very low at 0.5 %.31 In a prospective study of 80 patients with decompensated advanced CHF, the use of subclavian IABP is well tolerated with no increased mortality and few side effects.30 The commonly encountered complications of subclavian IABP are need for balloon pump repositioning (30 %), haematoma (5 %), infection (2 %) and subclavian artery thrombosis (1 %).30 Interestingly, there were no distal thromboembolic events with the subclavian IABP, making it safer than femoral IABP. In comparison to LVAD, IABP has much fewer complications. The disadvantages to LVAD, making it a more high-risk intervention compared to IABP, include obligate repeat sternotomy or rarely lateral thoracotomy, acquired von Willebrand disease, increased bleeding risk and greater risk of allosensitisation.34,35

IABPs are commonly used for temporary circulatory support in patients with advanced heart failure, particularly as a bridge to heart transplant or LVAD. Ambulation and physical conditioning of such patients are often paramount when awaiting major surgery and recovery; ambulatory restriction can be detrimental in cases of prolonged circulatory support. Through continued innovation and advancement in the field of heart failure and circulatory support, improvement in clinical care, as well as patient quality of life, is self-evident. As the use of ambulatory IABP becomes more prevalent, future studies should aim to measure its impact on health-related quality of life, as it may be useful in assessing the effectiveness of such acute interventions.