Climate change is a major contributor to annual winter peaks in cardiovascular events across the globe. However, given the paradoxical observation that cardiovascular seasonality is observed in relatively mild as well as cold climates, global warming may not be as positive for the syndrome of heart failure (HF) as some predict. In this article, we present our Model of Seasonal Flexibility to explain the spectrum of individual responses to climatic conditions. We have identified distinctive phenotypes of resilience and vulnerability to explain why winter peaks in HF occur. Moreover, we identify how better identification of climatic vulnerability and the use of multifaceted interventions focusing on modifiable bio-behavioural factors may improve HF outcomes.

There is universal acknowledgement that climate change and extreme weather events pose an increasing threat to global health.1,2 Precisely how this will affect patterns of disease is open to conjecture. For example, while it is predicted that increasingly warmer temperatures and more intense heat waves will provoke more cardiovascular, respiratory and renal events, a corollary reduction in cardiorespiratory events related to cold weather is also predicted.1

As with any threat to human health, it is the most vulnerable who will bear the brunt of increasingly unstable climatic conditions. Such vulnerability can be immediately identified in low-to-middle income countries (LMIC), which have limited resources and flexibility to respond to emerging health threats.3 However, despite better capacity to control living conditions, high-income countries (HIC) are unlikely to be immune to the effects of climate change. Indeed, it has been suggested that seasonal variations – predominantly winter peaks in morbidity and mortality in the growing population of older patients who have heart failure (HF) syndrome in HICs – will increase with global warming.4

In the absence of a framework to understand and predict inherent vulnerability to seasonal change and acute weather events, there is a vacuum in clinical research and expert guidelines focusing on the detection and prevention of seasonality in HF. It is on this basis that we propose a bio-behavioural model of resilience that identifies those most vulnerable to patterns of seasonality and climate change.

A Historical Perspective of Climatic Vulnerability

Adverse human responses to climatic conditions have long been recognised. Remarkably though, the impact of seasonal change and acute weather events on people with cardiovascular disease (CVD) is largely described as an epidemiological phenomenon.4 Accordingly, population cohort studies typically describe marked peaks in cardiovascular-related morbidity and mortality during the winter months with troughs during the summer months and less predictable peaks in event rates during or immediately following extreme or unseasonal weather events including heat-waves.4 People with pre-existing conditions such as HF and common comorbid metabolic and respiratory diseases are most likely to experience a seasonal event.4

As we try to adapt to the current era of rapid climate change, it has been observed that the extent of seasonality in those affected by HF and other cardiovascular disease (including ischaemic heart disease, stroke and AF) is not precisely correlated with climatic extremes and therefore confined to cold climates.5,6 Indeed, there is convincing evidence that cardiovascular-related deaths linked to seasonality occur more frequently in milder climates.4

As we will explain, this paradox suggests that seasonality is not entirely dependent on periodic exposure to environmental provocations such as cold extremes, but also depends on how an individual or society modulates their exposure and physiological response to that provocation. 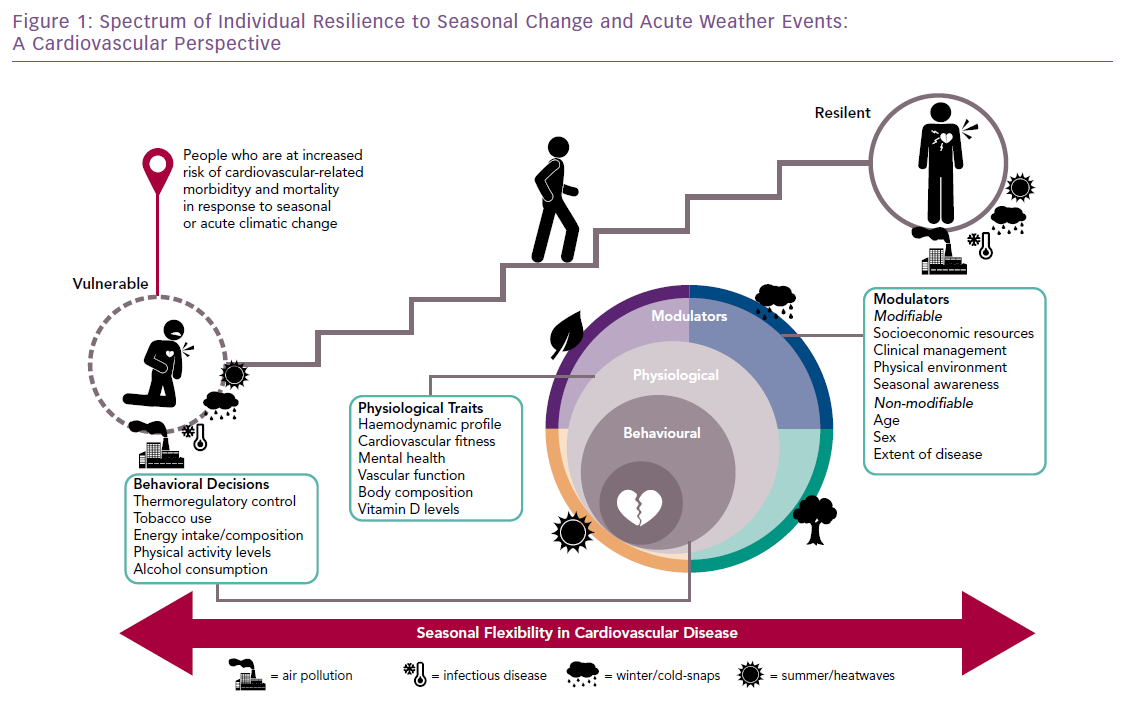 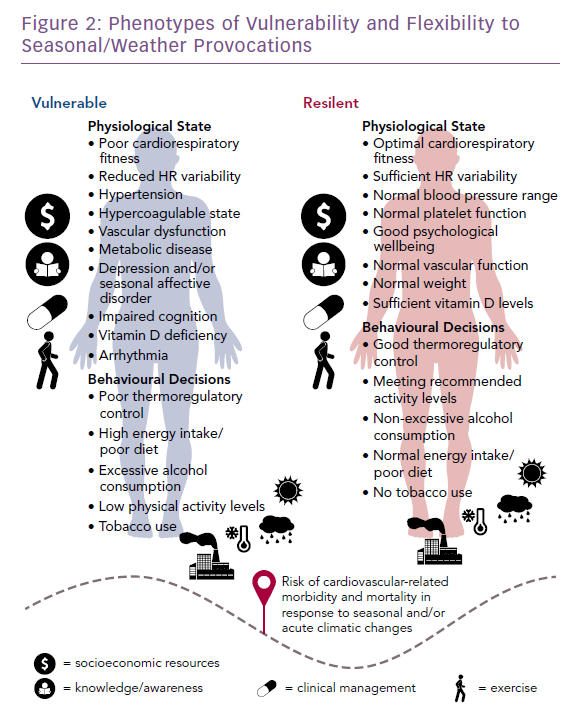 Organisms adapt to seasonal variation and abrupt changes in climatic conditions to prolong their longevity and ensure survival. Migratory birds adjust their behavioural and/or physiological responses to winter conditions, resulting in a winter phenotype characterised by increased storage of fat and tolerance to cold and changes in dietary patterns during the summer months.7 As humans have steadily migrated to diverse and harsh climates, we have also become ‘seasonally flexible’ to survive, albeit with an increasing capacity to enhance thermoregulatory control through clothing, housing and technology.

Maintenance of optimal health, including thermoregulation, depends on autonomous and voluntary, physiological and behavioural changes to modulate the potential adverse impact of rapid or prolonged changes in environmental conditions. Human physiological studies demonstrate our inherent capacity for blunted shivering and vasoconstrictor responses to prolonged cold exposure, as well as adaptations to warmer environments.8,9 It is reasonable to assume, therefore, that individuals who are routinely exposed to the cold of winter in higher latitude countries have developed more resilient, bio-behavioural responses over time.

A Model of Seasonal Flexibility

We have developed an interdisciplinary model to explain a spectrum of resilience to predictable (seasonal change) and unpredictable (extreme weather events) fluctuations in climatic conditions (Figure 1). This model proposes a combination of physiological and behavioural factors reflecting physical and cultural adaptations specific to the surrounding environment/climate many of which are reflected in distinctive cultural practices that contribute to an individual’s cardiovascular-specific and broader response to ambient climatic conditions. These factors, along with the roles of infectious diseases, pollution and mental health, contribute to a spectrum of risk for a cardiovascular event, ranging from resilience to vulnerability.10 This model has particular relevance to understanding the pattern of disease associated with:

It is feasible to phenotype people based on their seasonal flexibility. Figure 2 shows the polar opposites of a highly vulnerable phenotype versus a resilient one; the former being readily identifiable in most HF cohorts. We also propose that the key modulators (Figure 1), including financial resources, seasonal awareness, treatment and cardiorespiratory fitness, are critical in characterising these phenotypes. While this model presupposes that most people categorised as resilient will be younger and free from CVD, it also embraces the potential for those with pre-existing disease, including HF, to develop or regain seasonal resilience.

There is evidence to support the notion that promoting seasonal resilience improves health outcomes. For example, a study from 2007 examined people’s ability to adapt to winter in 50 cities in America, suggested central heating may reduce seasonal mortality.12 Moreover, clinical recommendations for large-scale vaccination programmes against influenza and pneumococcus are largely based on winter peaks in concurrent respiratory illnesses among patients with HF.4 In HICs, there is scope to run public health campaigns advising whole communities to prepare for seasonal change and acute weather events, along with individual alerts and subsidies for heating and cooling in vulnerable groups. However, reflecting current expert guidelines, beyond singular strategies addressing some of the components highlighted by our model, there is a lack of studies focusing on the complex profile and needs of vulnerable people to attenuate the effects of seasonality.13

In a global environment of rapid and extreme climatic events, more populations will be exposed to conditions they are not readily adapted to from a bio-behavioural perspective. Contrary to current predictions, this may mean a paradoxical increase in the seasonal cycle of events with greater winter peaks in acute decompensation and sudden cardiac death among a growing patient population with HF linked to cold exposure, even as overall global temperatures rise.1 Further research is required to determine the feasibility of characterising seasonal vulnerability in HIC and LMIC settings and to develop cost-effective strategies to promote resilience against the provocations of climate change.