Renin–angiotensin–aldosterone system inhibitors (RAASi) are known to improve outcomes in patients who have heart failure with reduced ejection fraction (HFrEF). To reduce mortality in these patients, RAASi should be uptitrated to the maximally tolerated dose. However, RAASi may also cause hyperkalemia. As a result of this side-effect, doses of RAASi are reduced, discontinued and seldom reinstated. Thus, the therapeutic target needed in these patients is often not reached because of hyperkalemia. Also, submaximal dosing of RAASi may be a result of symptomatic hypotension, syncope, hypoperfusion, reduced kidney function and other factors. The reduction of RAASi dose leads to adverse outcomes, such as an increased risk of mortality. Management of these side-effects is pivotal to maximise the use of RAASi in HFrEF, particularly in high-risk patients.

Heart failure (HF) affects 1–2% of the population in developed countries and absorbs a significant amount of human and economic resources.1,2 HF is a complex syndrome characterised by a spectrum of symptoms and phenotypes: HF with preserved ejection fraction, HF with mid-range ejection fraction and HF with reduced ejection fraction (HFrEF).3 Differentiating patients according to left ventricular ejection fraction (LVEF) is relevant as these syndromes have distinct patterns of underlying aetiologies, demographics, comorbidities and response to therapies.4,5

The renin–angiotensin–aldosterone system (RAAS) plays a crucial role in HFrEF (Figure 1). Its activation has harmful long-term effects, such as water and salt retention, and promotes adverse ventricular remodelling.6 RAAS inhibitors (RAASi) are a group of drugs that act by antagonising the RAAS and include angiotensin-converting enzyme inhibitors (ACEi), angiotensin receptor blockers (ARBs) and mineralocorticoid receptor antagonists (MRAs). Therapies that target the RAAS have been shown to reduce both morbidity and mortality in HFrEF patients.7

According to the latest European Society of Cardiology (ESC) HF guidelines, RAASi are recommended in all symptomatic (New York Heart Association class II–IV) patients with HFrEF.3 ACEi are recommended as first-line treatment in all HFrEF symptomatic patients, unless contraindicated or not tolerated, to reduce mortality and morbidity. Clinical trials provide strong evidence of prognostic benefits for combination therapy with ACEi and beta-blockers in the treatment of HFrEF. In particular, an ACEi is recommended in addition to a beta-blocker for symptomatic patients with HFrEF to reduce the risk of HF hospitalisation and death. ACEi are also recommended in patients with asymptomatic left ventricular systolic dysfunction to reduce the risk of HF development, HF hospitalisation and death.

Finally, angiotensin receptor-neprilysin inhibitors (ARNis) – a new class of agent acting on the RAAS and neutral endopeptidase system – have been developed. Among these, LCZ696 combines the moieties of an ARB (valsartan) and a neprilysin inhibitor (sacubitril) and has been found to reduce mortality and several other endpoints in HFrEF.3 Of note, a secondary analysis of the baseline characteristics and treatment of patients in the Prospective comparison of ARNI with ACEI to Determine Impact on Global Mortality and morbidity in Heart Failure trial (PARADIGM-HF) showed that hyperkalemia was reduced in patients treated with sacubitril/valsartan compared with enalapril.9 However, the long-term safety of sacubitril/valsartan still needs to be investigated. 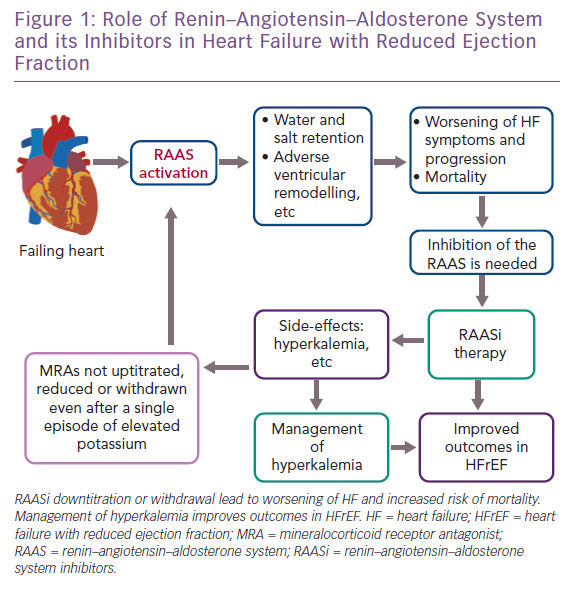 A systematic review and meta-analysis compared higher versus lower doses of ACEi and ARBs in HFrEF.10 The results suggest that higher doses of ACEi and ARBs reduce the risk of HF worsening compared with lower doses. Higher doses also increase the likelihood of adverse effects compared with lower doses. Uptitration should occur in a gradual manner, starting from low doses – preferably in a controlled setting – to avoid side-effects, as recommended by the ESC guidelines.3

As for ACEi, results from the Assessment of Treatment with Lisinopril and Survival (ATLAS) trial showed that HFrEF patients taking high-dose lisinopril had a significant reduction in risk of death or hospitalisation for any cause and fewer hospitalisations for HF than the low-dose group.11 Thus, uptitration of a RAASi to the maximum tolerated dose to achieve adequate inhibition of the RAAS is pivotal in improving outcomes in HFrEF.7

Similarly, the Heart failure Endpoint evaluation of Angiotensin II Antagonist Losartan (HEAAL) study showed that the ARB losartan at high dose significantly reduced the rate of death or admission for HF and reduced LVEF, compared with low-dose losartan.12 All these findings indicate the value of uptitrating RAASi doses to confer clinical benefit.

Unfortunately, uptitration of RAASi is associated with an increased risk of hyperkalemia. For this reason, RAASi are frequently omitted or discontinued in clinical practice. In particular, data from the ESC HF registry reveal that RAASi were frequently underdosed because of persistent and consistent hyperkalemia and/or worsening renal function.13 Hyperkalemia is more often observed when RAASi are administered in combination than when administered individually.14 Of note, a substantial proportion of patients receiving RAASi therapy have their therapy downtitrated or, more often, discontinued even after a single episode of elevated potassium level.7 In a retrospective study, RAASi discontinuation was observed in up to 25% of patients and underdosing of RAASi in about two-thirds of patients.15

Thus, despite their well-known efficacy, most patients receive submaximal doses of RAASi in clinical practice.16,17 RAASi-induced hyperkalemia hinders the use of these drugs, countering their survival benefits.7,13,14 Analyses from Swedish and Danish registries found that hyperkalemia was associated with increased mortality.18,19 Interestingly, increased risks of mortality are similar for patients who received reduced RAASi doses and those who discontinued.20 As such, hyperkalemia is a crucial limitation to fully titrating RAASi, with harmful consequences such as increased risk of worsening HF and mortality.

To avoid these severe outcomes, treatment for lowering potassium levels may be initiated.7 Treatment should be personalised according to the severity of hyperkalemia and other factors such as comorbidities, age and levels of RAASi. According to the ESC expert consensus document, when hyperkalemia develops, it is recommended that patients’ potassium level is lowered to enable them to continue their RAASi therapy.7 The ESC guidelines recommend that if a withdrawal of these drugs is necessary, this should be a short-term cessation only and RAASi should be cautiously re-established as soon as possible while monitoring potassium levels.3 Also, potassium elevations below 5 mmol/l should not lead to RAASi cessation because only an increase above 5.5 mmol/l is harmful.3,21 In this case, only temporary dose reduction should be considered.7

Dose reduction or discontinuation of RAASi is not always needed. Hyperkalemia should be considered as an expected adverse event of RAASi.20 Potassium levels quickly rise after induction of RAASi, but the risk of hyperkalemia is low if potassium level is properly monitored. For this reason, when starting an ACEi or an ARB, close monitoring of potassium, blood pressure and creatinine is recommended.3 Of note, the combination of ACEi or ARBs and MRAs with thiazide diuretics may neutralise the risks of hyperkalemia.7

However, prevention of hyperkalemia remains a controversial issue. Potassium monitoring should be tailored to the individual patient. Patients at high risk of hyperkalemia should undergo potassium measurements initially, at 2 weeks, 1 month and every 3 months thereafter. Patients at low risk of hyperkalemia should undergo testing at 1, 3 and 6 months after the initial event and twice yearly thereafter. In any case, potassium should be measured whenever there is a clinical indication and/or change in medications.

Unfortunately, it has been shown that measurements of potassium are not regularly executed in practice.20,22 Quality-improvement programmes are strongly needed to improve rates of laboratory monitoring for patients initiated on RAASi therapy, particularly in high-risk patients.7 RAASi discontinuation and restarting should be planned following an algorithm, as in the Eplerenone in Mild Patients Hospitalization and Survival Study in Heart Failure (EMPHASIS-HF).23 In the near future, new potassium binders may help optimise RAASi therapy by allowing uptitration of RAASi dosage.

New therapeutic options exist to enhance potassium excretion, such as patiromer and sodium zirconium cyclosilicate (ZS-9), which have been shown in randomised trials to significantly reduce serum potassium in patients with hyperkalemia on RAASi. Clinical studies of patiromer and ZS-9 demonstrated their dose-dependent potassium-lowering effects. These new potassium binders may be helpful in optimising RAASi therapies in patients with hyperkalemia or at increased risk of developing it.7 However, the safety and long-term benefits for outcomes and drug–drug interactions, should be further evaluated in proper clinical trials.

Future studies should consider the inclusion of patients with RAASi-induced hyperkalemia – who are usually excluded from clinical trials – to overcome the knowledge gap in this important subgroup.24 Further studies of uptitration to optimal dosing of RAASi in HF are also needed. Future research should focus on prevention of hyperkalemia and strategies to optimise RAASi.

Beyond hyperkalemia, it should be noted that submaximal dosing of RAASi may be caused by other factors, such as symptomatic hypotension, syncope, hypoperfusion and reduced kidney function. In particular, hypotension and worsening renal function are common barriers to the treatment of HFrEF. Thus, correcting hyperkalemia often does not resolve the problem and management of these side-effects is needed.