Ejection fraction is one of the most powerful determinants of prognosis and is a crucial parameter for the determination of cardiovascular therapies in conditions such as heart failure, valvular conditions and ischaemic heart disease. Among echocardiographic methods, 3D echocardiography has been attributed as the preferred one for its assessment, given an increased accuracy and reproducibility. Full-volume multi-beat acquisitions are prone to stitching artefacts due to arrhythmias and require prolonged breath holds. Single-beat acquisitions exhibit a lower temporal resolution, but address the limitations of multi-beat acquisitions. If not fully automated, 3D echocardiography remains time-consuming and resource-intensive, with suboptimal observer variability, preventing its implementation in routine practice. Further developments in hardware and software, including fully automated knowledge-based algorithms for left ventricular quantification, may bring 3D echocardiography to a definite turning point.

Left ventricular ejection fraction (LVEF) is the most widely used parameter of left ventricular (LV) systolic function, and its deterioration is associated with reduced survival rates.1 LVEF is expressed as a percent value, and calculated by dividing the stroke volume (enddiastolic volume minus end-systolic volume) by the end-diastolic volume and multiplying by 100; however, volume measurements entail a much higher complexity.2 Despite these limitations, noninvasive imaging has become the mainstay for the assessment of LV volumes and ejection fraction (EF), and echocardiography (echo) is the workhorse modality in routine clinical practice.3

Echo itself provides different methods to assess LV volumes and these have evolved historically (see Figure 1). The first non-invasive assessment of EF was performed using mono-dimensional (M-mode) echocardiographic images of the heart in the late 1960s,4 which within a lustrum transitioned to real-time 2D and 2D-derived 3D echocardiographic assessments.5 Accuracy (closer to the gold standard) and precision (better reproducibility) – unequivocal determinants of clinical utility of echo – also progressed; yet, the position of echo as potentially the best solution for EF assessment was envisioned with the introduction of the matrix-array transducer in the late 1980s together with the progressive validation of real-time 3D echo.6

Other imaging modalities for assessment of EF exist and may be preferred under specific scenarios, but are associated with an increased cost and complexity (cardiac magnetic resonance; CMR), radiation (CT) or both (nuclear imaging).7 Notwithstanding, among all imaging modalities, CMR is generally referred to as the gold standard for the assessment of LV volumes. Image quality obtained with CMR is superior to echo despite its technically lower spatial and temporal resolution, since it is much less limited by the acoustic window (see Figure 2).8,9 The use of short-axis slices for contouring and the possibility of long-axis corrections for the basal and apical limits of the LV may also contribute to this attribute.10,11

Different echo methods for the assessment of EF have been compared with CMR and currently there is no doubt that 3D echo, with good image quality, offers the closest approximation to CMR-derived volumes.12 M-mode has been retracted as a valid method for volume derivations and 2D-derived biplane or triplane volumes may be limited by potential foreshortening and out-of-plane wall motion abnormalities.2

When comparing with CMR, 3D echo shows closer agreement for LV volumes quantification than 2D echo. In a meta-analysis including 28 studies comparing 3D echo with CMR in 1,198 individuals, 3D echo underestimated the LV end-diastolic volume (LVEDV) by −14 ± 5 ml and the LV end-systolic volume (LVESV) by −7 ± 3 ml, while LVEF was virtually the same among both modalities.13 2D-derived volumes showed a larger bias, being −33 ± 10 ml for LVEDV and −16 ± 5 ml for LVESV. In practice, this entails that LVEF, but not LV volumes, can be used interchangeably among these modalities. Concordantly, current guidelines recommend the use of biplane 2D method of disks summation (biplane Simpson’s method) and, in laboratories with experience in 3D, 3D echo is recommended when image quality is adequate for analysis.2 Interestingly, larger biases between 3D echo and CMR have been reported in women and in patients with congenital or acquired cardiac disease.14 Limited comparisons have been performed in patients with ventricular aneurysms or hypertrophic cardiomyopathy, generally excluded from validation studies. Noteworthy, underestimation of volumes is more pronounced in patients with depressed LVEF, since the true boundary (i.e. endocardial border) between compacted myocardium and the LV cavity (blood and trabeculations) is less well defined (see Figure 2).15 This phenomenon is also common in patients with noncompacted cardiomyopathy, and accentuated when image quality is suboptimal.

Despite the initial enthusiasm, 3D echo has not been able to replace 2D echo in routine clinical use, and has never been successfully applied in clinical trials.16–18 Favourable characteristics are its potentially high accuracy and precision, but these are counterbalanced by several factors. Firstly, quality of the 3D datasets is determined by patient factors (e.g. acoustic window, regular cardiac rhythm and adequate breath hold), and suffers from relatively low temporal and spatial resolutions. Temporal resolution (i.e. volume rate) refers to the ability of localising an anatomic structure in a point in time and is limited by the speed of sound, but can be improved by reducing the sector size (width and depth). In addition, spatial resolution – defined as the ability to differentiate two points in space – is dependent on the number of scan lines per volume (scan line density). However, the more scan lines, the longer the acquisition time, the lower the volume rate. Thus, smaller scanned sectors offer a better overall resolution.16 Secondly, 3D echo requires even more in-depth knowledge of the echo settings during acquisition in order to obtain the best image possible, as has been recently outlined by the European Associations of Echocardiography and the American Society of Echocardiography.16 Moreover, as with 2D images, the analysis of 3D images has an inherent learning curve before obtaining reliable results.17 Thirdly, if not fully automated, 3D echo for the assessment of LVEF is still a time-consuming process, representing a logistical and economic challenge for the clinical work flow.

Full-volume multi-beat acquisitions offer the best available 3D resolution and provide the recommended datasets for the assessment of LV volumes.16 Wide-angle single-beat acquisitions, however, overcome stitching artefacts common in irregular cardiac rhythms, and avoid the need for prolonged breath holds.19 Initial experience with singlebeat analysis showed similar findings to those described for manual 3D when compared with CMR in patients with sinus rhythm, with a bias of −18 ± 27 ml for LVEDV, −10 ± 18 ml for LVESV, and −0 ± 3 % for LVEF.15 Furthermore, results in patients with AF were comparable with those obtained with the biplane Simpson’s method.15 Notwithstanding, there is a trade-off between temporal and spatial resolutions when considering single-beat 3D.19 Whereas optimally recorded multi-beat acquisitions show a temporal resolution of 33 ± 8 volumes per second (vps), superior to CMR (24 heart phases per cardiac cycle), singlebeat acquisitions may be as low as 7 ± 2 vps, which are insufficient to capture the LVESV.12,20 In addition, the imaging modes during acquisition influence the spatial and temporal resolutions, where the harmonic and space modes provide better spatial resolution than the fundamental and time modes with varying spatial resolution from 14 ± 2 vps up to 49 ± 7 vps. Datasets with the highest temporal resolution are those with the lowest spatial resolution.19 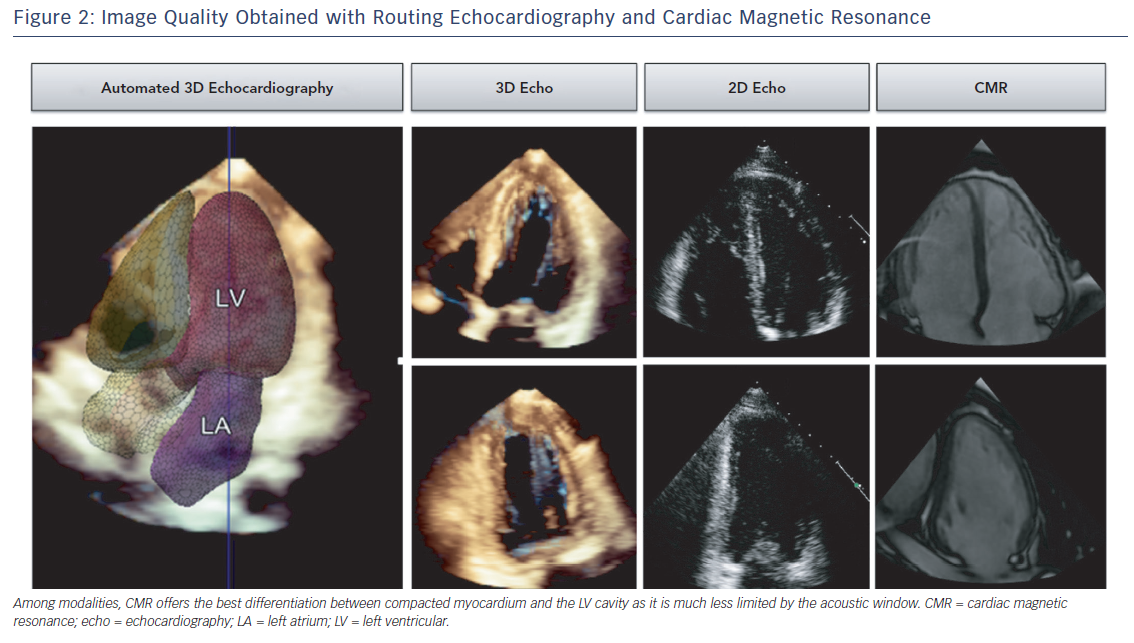 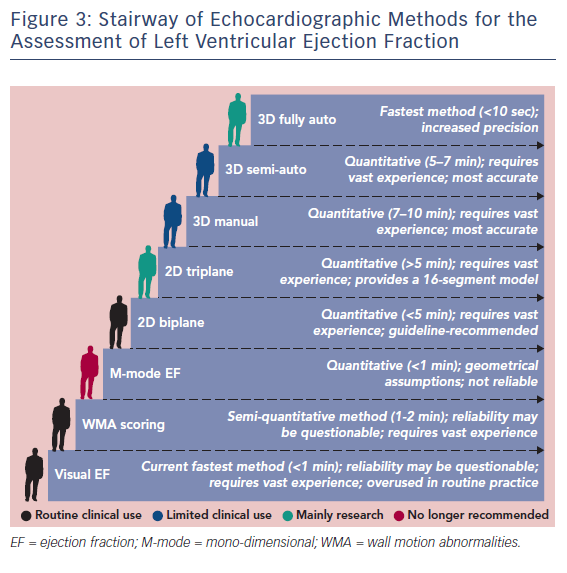 The current status of ejection fraction assessment in echo laboratories is summarised in Figure 3. Although not endorsed by the guidelines, echo reports with visual estimates of LVEF are frequently observed. Visual EF is a fast method and has shown adequate accuracy with expert readers.21 Wall motion scoring and a derived LVEF has also been implemented as a semi-quantitative alternative.22,23 Conversely, the biplane Simpson’s method is not systematically used in a significant proportion of echo laboratories, which points towards a practical mismatch with the guidelines.2 3D echo is currently confined to limited clinical use and research use (see Figure 4). The need for advanced training, its critical dependency on image quality and its persistent complexity may continue to limit the generalizability of 3D echo. 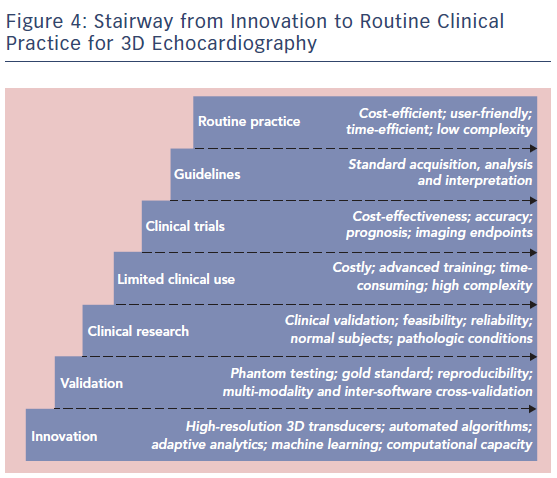 Conversely, a cost- and time-efficient, user-friendly approach is needed. This may only be possible with the advent of improved echocardiographic probes, higher computational capacity and machine learning technologies. Effort should be focused on the development of more potent probes aiming mainly to improving spatial resolution, as single-beat acquisitions with 3D echo are currently close to CMR in terms of temporal resolution.19 This, however, is a clinical demand that has been standing for a decade.24 With the current limitations, 3D echo for assessment of LVEF can be implemented in routine clinical flow if sufficient resources are assigned,25 including: training and certification of personnel performing 3D acquisitions (including a standard protocol); a dedicated (specialised) team for off-line 3D LVEF assessment to assure reliable measurements (accurate and reproducible); and assigning the appropriate time for acquisition, analysis, approval and interpretation of 3D EF measurements. Consequently, the establishment of training programmes to enable widespread learning of each of the steps mentioned above has the potential to extend this technique.

Importantly, in order to use 3D echo in routine clinical practice, robust normal reference values are required. Recent guidelines on chamber quantification provide limited data on no more than 1,780 subjects, with different ethnic backgrounds.2 These data seem insufficient to reliably provide guidance based on gender, age and ethnicity. A recent meta-analysis including 2,806 subjects highlighted that significant heterogeneity and inconsistency exist among studies, which calls for standardisations and a collaborative prospective collection of data.26

Published data in which commercially-available software were used in a fully automated manner is limited to two vendors, in which knowledge-based probabilistic contouring algorithms29 or adaptive analytics algorithms are used.30 Initially, it was Siemens ultrasound that integrated the left ventricle analysis (LVA) tool in the ACUSON SC2000 PRIME (Siemens Healthcare) workplace, which uses an expert knowledge database for border detection. Subsequently, Philips Healthcare incorporated the HeartModel algorithm in the Philips EPIQ 7 machine. The algorithms start by automatically detecting the enddiastolic and end-systolic phases, generating preliminary endocardial surfaces that are then compared with an existing database of 3D datasets. Then, the software matches volumes and shapes and generates a model adapted to the patients’ LV.30 Table 1 summarises the available data on comparisons between fully automated 3D algorithms and either CMR or manual echo (2D or 3D).15,17,19,30–34

Except for one,17 all studies investigated selected cohorts. Feasibility remains low (one-third not feasible) due to contouring algorithm failures in presence of suboptimal image quality or false data acquisition triggering.15,17,19 However, AF does not preclude the use of fully automated algorithms, as has been demonstrated in limited number of studies.15,31 The ease of use and the high reproducibility of these algorithms make this strategy a candidate for bringing 3D EF into a widespread clinical use; however, there remain some challenges. Firstly, image quality plays a pivotal role, and results obtained with poor but analysable image quality (evidenced in up to one-fourth of an unselected population) provide inaccurate results.17 Secondly, existing databases of 3D datasets within the algorithms seem not to properly address subjects with large aneurysms, complex congenital heart disease or even dilated ventricles, where larger underestimation of volumes has been reported.15,30 A reasonable approach would be to extend such database to specific conditions that can be selected during acquisition (i.e. an adaptive acquisition protocol). Thirdly, under an expert eye 80 % of fully automated contours would still need some degree of correction.17 These include small changes that marginally affect the volumes and EF but also larger changes that could significantly affect the decision-making process for a specific patient. Thus, until results in larger cohorts show differently, proper training in LVEF assessment and supervision of automated contours is strongly encouraged. Finally, both fully automated algorithms are vendor-dependent, and this technology cannot be applied to acquisitions performed with other machines. Further development and validation of a vendor-independent software, such as the TomTec 4D LV-Analysis software, may further expand the use of fully automated analysis.35

Within half a century echo has matured into the preferred non-invasive modality for the assessment of LVEF and volumes. 3D echo offers the best accuracy and reproducibility within echocardiographic methods; however, it is still time-consuming and requires significant expertise. The advent of fully automated 3D analysis software may represent an opportunity to further promote and investigative the widespread use of 3D echo.